Shire of Paroo facts for kids

The Shire of Paroo is a local government area in South West Queensland, Australia. The administrative centre is the town of Cunnamulla. The Paroo Shire covers an area of 47,714.5 square kilometres (18,422.7 sq mi). At the 2006 census, 1,217 of Paroo's 1,928 residents lived in Cunnamulla.

The dominant industry is grazing. Opal fields are also worked within the shire. 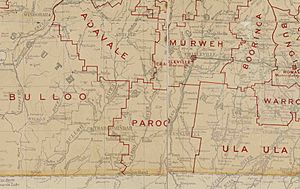 Paroo Division was established on 11 November 1879 as one of the original divisions proclaimed under the Divisional Boards Act 1879 with a population of 799.

With the passage of the Local Authorities Act 1902, Paroo Division became the Shire of Paroo on 31 March 1903. 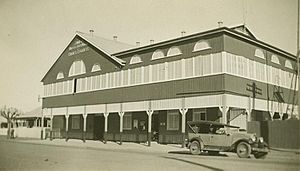 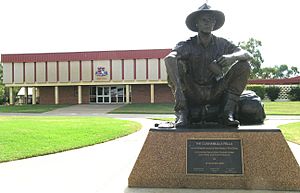 In 1924, the shire was building a new shire hall, but it was wrecked in a violent dust storm on 5 February 1924. However, they were able to straighten and strengthen the building and it was finally opened on 6 December 1924 by the Minister for Public Instruction, Frank Brennan.

The current Paroo Shire Council Civic centre is located on the corner of Stockyard Street and Louise Street, Cunnamulla.

The Shire of Paroo includes the following settlements:

All content from Kiddle encyclopedia articles (including the article images and facts) can be freely used under Attribution-ShareAlike license, unless stated otherwise. Cite this article:
Shire of Paroo Facts for Kids. Kiddle Encyclopedia.