Eulo is an opal-mining town and locality in the Shire of Paroo in South West Queensland, Australia. Eulo is 64 kilometres (40 mi) west of Cunnamulla and 887 kilometres (551 mi) west of Brisbane. At the 2006 census, Eulo and the surrounding area had a population of 108. 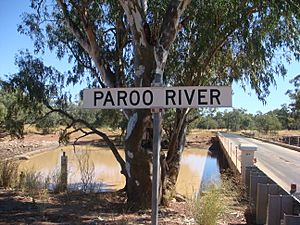 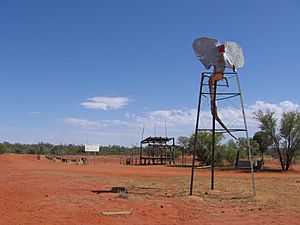 This outback town is located beside and to the east of the Paroo River which flows in a roughly north-south direction. The Bullo Development Road (also known as the Adventure Way) connects Eulo to Cunnamulla to the east and to Thargomindah to the west.

The post office opened on 6 September 1872; the first postmaster was the publican William Shearer. A town reserve was proclaimed in 1874. A police station was established about 1 January 1880. A Court of Petty Sessions was established on 18 August 1880 and operated until 31 December 1964. A telegraph office opened in 1881. Eulo State School opened on 7 May 1888. The telephone exchange opened in 1923.

Eulo has one pub and a small general store as well as Outback Petrol. The general store and fuel bowsers were destroyed by fire on 25 July 2011. It has since been rebuilt.

All content from Kiddle encyclopedia articles (including the article images and facts) can be freely used under Attribution-ShareAlike license, unless stated otherwise. Cite this article:
Eulo, Queensland Facts for Kids. Kiddle Encyclopedia.