Angledool is a locality in upper western New South Wales near the southern border of Queensland, one kilometre east of the Castlereagh Highway and approximately 45 kilometres north of Lightning Ridge. At the 2006 census, Angledool had a population of 84 people. 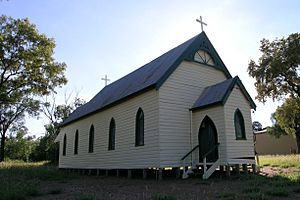 A church at Angledool, NSW.

Angledool was previously known as New Angledool when it was established in the 1870s.

In 1873 Robert Moore, the manager of the pastoral property, Muggarie Station, later known as Angledool Station, discovered opals. Charlie Dunstan in 1908 found two large opals the "Fire Queen" and "Queen of the Earth", at the Angledool diggings.

The nearby Narran River has led to flooding of the Angledool area in 1890, 1956, 1990, 1996 and again in March 2010. The 1956 flood was the biggest one that has been recorded. In March 2010 the Narran River at Angledool flooded the nearby, Angledool Lake, which covers an area of around 1,100 hectares when full. The lake then spilled into Weetalabah Creek that crosses the Castlereagh Highway, thus filling the Coocoran Lake, near Lightning Ridge.

Prior to World War II Angledool had a bakery, several hotels, a post office, court house and a general store. The village now has an old cemetery, a church, a few houses and several buildings that are over 120 years old. The town hall made from locally made mud bricks is a classic example of early local architecture.

All content from Kiddle encyclopedia articles (including the article images and facts) can be freely used under Attribution-ShareAlike license, unless stated otherwise. Cite this article:
Angledool Facts for Kids. Kiddle Encyclopedia.