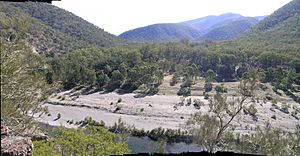 Formed by the confluence of the Gara River, Salisbury Waters and Bakers Creek, the Macleay River rises below Blue Nobby Mountain, east of Uralla within the Great Dividing Range. The river flows in a meandering course generally east by south, joined by twenty-six tributaries including the Apsley, Chandler, and Dyke rivers and passing through a number of spectacular gorges and waterfalls in Cunnawarra National Park and Oxley Wild Rivers National Park, before reaching its mouth at the Tasman Sea, near South West Rocks. The river descends 460 metres (1,510 ft) over its 298 kilometres (185 mi) course.

The river flows adjacent to the city of Kempsey. At Frederickton the river is traversed by the Pacific Highway via the Macleay River Bridge (Dhanggati language: Yapang gurraarrbang gayandugayigu). At the time of its official opening in 2013, the bridge was the longest road bridge in Australia. The river is also traversed by the North Coast railway line.

The Dunghutti, an Aboriginal Australian people, are the traditional custodians of the land surrounding the Macleay River catchment and the Apsley River catchment, whose descendants are now concentrated in the lower Macleay River. Archaeological evidence of Aboriginal camp sites have been found on the upper terraces of the Macleay and Apsley rivers.

John Oxley, failed to realize the potential of this river in 1820 when he did not navigate far enough up the river to see the magnificent stands of timber and the fertile land. The river was vaguely referred to as the New River from descriptions given by Aborigines. In 1826 Captain Wright travelled overland from Port Macquarie and explored to the head of navigation at Belgrave Falls, a series of rapids to the west of the present town of Kempsey. Then called Wrights River, Major Archibald Clunes Innes, Commandant of Port Macquarie Penal Settlement, sent the first government gang of Australian red cedar (Toona ciliata) cutters to work here in 1827.

More cedar camps were established on the Macleay during the 1830s and the area was also a haven for escaped convicts. By 1841, about 200 cutters were working on the river area, where violence and theft of logs was not uncommon. Demand and prices dropped in 1842 and cutting along the Macleay diminished although it continued in the upper tributaries. When Europeans arrived in the area around the 1820s the river mouth was just south of Grassy Head, and almost a mile wide with a sand spit in the middle. The small town of Stuarts Point was established on the river just inside to serve arriving ships.

The coastal strip extending from South West Rocks to Grassy Head is a wide delta with various channels connected to the river. Around 1885 English marine engineer John Coode advised on improvements to various rivers and ports in Australia, including the Macleay. The Department of Public Works prepared four plans for improvements to the mouth, Coode favoured improving the existing entrance. In 1893 a flood enlarged an opening near South West Rocks and the department elected to improve that, called the New Entrance, though Coode had thought it not enough to drain all the waters of the district. Work on the new entrance commenced in April 1896, improving the channel and adding training walls. A new pilot station was built in 1902, establishing the town of South West Rocks. Work was completed in 1906. Today the old mouth has silted up, leaving Stuarts Point on a dead-end reach.

All content from Kiddle encyclopedia articles (including the article images and facts) can be freely used under Attribution-ShareAlike license, unless stated otherwise. Cite this article:
Macleay River Facts for Kids. Kiddle Encyclopedia.