Shire of Cloncurry facts for kids

The Shire of Cloncurry is a local government area in North West Queensland, Australia. It covers an area of 48,113.3 square kilometres (18,576.6 sq mi), and has existed as a local government entity since 1884. The major town and administrative centre of the shire is Cloncurry.

Prior to European settlement the area was home to the Mitakoodi, Kalkadoon and Pitta Pitta Aboriginal people.

The ghost town of Mary Kathleen, a town servicing a uranium mine since closed, is in the shire. 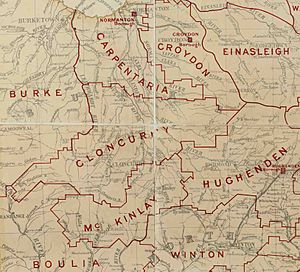 The Doonmunya Division was created on 11 November 1879 as one of 74 divisions around Queensland under the Divisional Boards Act 1879 with a population of 396. However, the divisional board appeared to be completely inactive, perhaps because the division was so large (being the area surrounding the southern part of the Gulf of Carpentaria) and was very sparsely settled. Nonetheless some of the citizens were unhappy about this. Consequently, on 11 January 1883, the Doonmunya Division was abolished and a new Carpentaria Division was created to replace it.

On 30 January 1885, adjustments were made to boundaries of the Cloncurry Division when the Burke Division was also split off from the Carpentaria Division.

On 31 March 1903, Cloncurry Division became the Shire of Cloncurry.

The Shire of Cloncurry includes the following settlements:

All content from Kiddle encyclopedia articles (including the article images and facts) can be freely used under Attribution-ShareAlike license, unless stated otherwise. Cite this article:
Shire of Cloncurry Facts for Kids. Kiddle Encyclopedia.