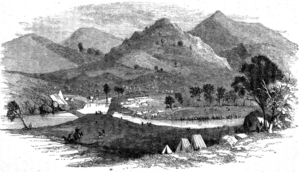 Ophir is the name of a locality in New South Wales, Australia in Cabonne Shire.

Although Hargraves was honoured and rewarded, it may have been William Tipple Smith, mineralogist, who first discovered gold at what would be later named Ophir, in 1848. On 27 February 1852 William Tipple Smith wrote to geologist Sir Roderick Murchison in England saying the spot now called Ophir was the very spot where he had found nugget gold in 1848. Smith's claims and correspondence are exhaustively studied in a 1986 book "A Fool's Gold?" by Lynette Ramsay Silver, in the foreword of which geology Professor David Branagan of Sydney University concurs and states "It is good to see him deservedly remembered in the pages of this book". William Tipple Smith was one of the owners of the Fitzroy Iron Works at Mittagong and, during a visit in February 1849, Governor Charles Augustus Fitz Roy was presented with a steel knife "mounted with colonial gold".

All that now remains of Ophir is very slight. All that remains of William Tipple Smith is one small gold sample and a previously unmarked grave (number 4929, section 4, Rookwood Cemetery) that was only recently provided with a headstone recognising him as the discoverer of the first payable gold in Australia.

All content from Kiddle encyclopedia articles (including the article images and facts) can be freely used under Attribution-ShareAlike license, unless stated otherwise. Cite this article:
Ophir, New South Wales Facts for Kids. Kiddle Encyclopedia.