What is now Hill End was originally a part of the Tambaroora area: Tambaroora town was a few kilometres to the north of present-day Hill End. In the 1850s the Hill End area was known as Bald Hills. In 1860 a village was proclaimed, first as Forbes, then in 1862 it was altered to Hill End. In the early 1870s Hill End took over Tambaroora as the main town in the area. 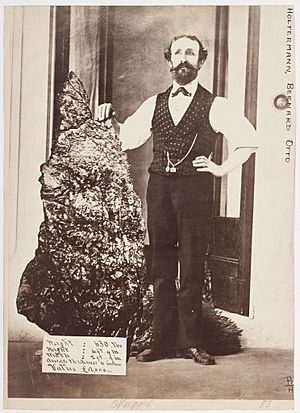 Bernhardt Holtermann with the 630lb rock containing more than 75 percent gold from Hill End, unearthed in 1872

Hill End owes its existence to the New South Wales gold rush of the 1850s, and at its peak in the early 1870s it had a population estimated at 8,000 served by two newspapers, five banks, eight churches, and twenty-eight pubs.

The town's decline when the gold gave out was dramatic: by 1945 the population was 700. At the 2006 census, Hill End had a population of 166 people. The photographer Beaufoy Merlin recorded daily life in the town at its peak; his photographs can be found in the town museum/visitor information centre. The glass plate negatives are held in the State Library of New South Wales.

In October 1862 the Telegraph line reached Hill End (Tambaroora) from Bathurst via Sofala, the Telegraph Office opened for telegraph messages bringing the remote town into instant contact with the rest of the Colony. Prior to this event communications took 12 hours by the mail stagecoach to Bathurst.

After delays due to lack of materials a telephone line was installed into Hill End in 1914; after 60 years of Morse code telegraph messages Hill End could now speak to adjacent towns and even Sydney if necessary.

In the late 1940s Hill End was discovered by artists Russell Drysdale, who painted possibly his best-known work, The cricketers there, and Donald Friend, and it quickly became an artists' colony. Other artists who worked there included Jean Bellette. Today, the Hill End artist-in-residence program aims to ensure the continuity of this connection.

The Hill End & Tambaroora Gathering Group has been in existence since the 1930s. Their goal is to provide information on the life, the families and events of a bygone era and to connect their worldwide community of descendants who have an affiliation to the district. Their website contains transcriptions of many primary records, listing names of the early miners and pioneers, that may not appear in the more mainstream family history resources. 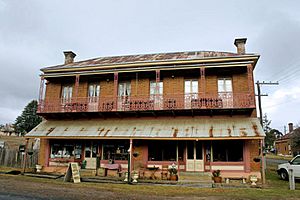 Hill End is classified as a historical site by the National Parks and Wildlife Service (NPWS), however it is still home to a handful of residents operating the local pub, general store, cake store and antique store. The NPWS runs a museum just off the main road which contains many original photos and items of equipment from the busy days of the gold rush. A more extensive museum, the privately owned History Hill, is located a few kilometers from the town on the Bathurst Road.

NPWS has installed signs around the town to give visitors an idea of what was once in place on the now empty lots of land. Currently only a handful of buildings remain in their original form. However most of those buildings still serve the purpose they did back during the gold rush. Access to the town's lookouts is via gravel roads. A walking track in the town leads to a mine and other ruins.

The most popular tourist activity in Hill End is gold panning, with some of the older members of the community running gold panning tours in the same fossicking areas that yielded the gold which brought on the gold rush. Metal detectors or gold panning are not allowed within the historic site, however there is a fossicking area just past the cemetery, off the Mudgee Road.

The Royal Hotel and the local Bed and Breakfasts offer accommodation, and there is a range of camping options within the town limits.

The Bridle Track runs from Duramana (North of Bathurst) directly to the town centre of Hill End. Generally the track can be classified as an easy 4WD track. The Bridle Track begins as a narrow tar-covered road, however it later changes to dirt. Much of the last 20 kilometres (12 mi) is single-lane. Part of the Bridle Track is currently closed, after a rockfall has rendered it impassible at Monaghan's Bluff.

All content from Kiddle encyclopedia articles (including the article images and facts) can be freely used under Attribution-ShareAlike license, unless stated otherwise. Cite this article:
Hill End, New South Wales Facts for Kids. Kiddle Encyclopedia.