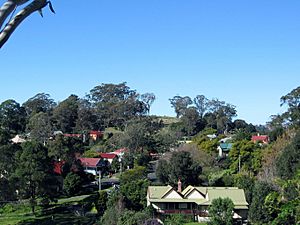 A view of Central Tilba 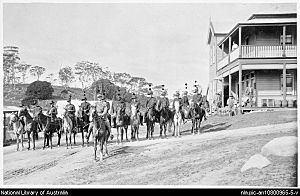 Central Tilba and Tilba Tilba are two villages near the Princes Highway in Eurobodalla Shire, New South Wales, Australia. At the 2011 census, the "state suburb" of Central Tilba (including Tilba Tilba and surrounding areas) had a population of 391 people. It is the site for the television series: River Cottage Australia.

The area was originally inhabited by the Yuin Aboriginal tribe. Tilba Tilba is the original name of the district, and is said to be a Thawa Aboriginal term for "many waters". The town was settled during the Australian gold rushes of the nineteenth century. It was the home town of the Bate family of political renown.

Central Tilba is located around 10 kilometres (6 mi) south south west of Narooma and is 60 kilometres (37 mi) north of Bega. The entire village is classified by the National Trust as the Central Tilba Conservation Area.

The ABC Cheese Factory in Central Tilba was in operation from September 1891 until 2006 and it remains a local attraction. The Tilba Factory was purchased in 2012 by two local dairy farmers who installed new cheese making and milk bottling equipment, bringing back the tradition of dairy manufacture to the Tilba area. The milk bottled and cheese made on site are from two local dairy farms, one in Tilba one in Cobargo. There are 19 locals employed at the Tilba Factory where they produce award-winning cheese, yoghurt, milk and cream, all from creamy jersey milk.

All content from Kiddle encyclopedia articles (including the article images and facts) can be freely used under Attribution-ShareAlike license, unless stated otherwise. Cite this article:
Tilba, New South Wales Facts for Kids. Kiddle Encyclopedia.