Bermagui is a town on the south coast of New South Wales, Australia in the Bega Valley Shire. It lies on the shores of the southern end of Horseshoe Bay. The name is derived from the Dyirringanj word, permageua, possibly meaning "canoe with paddles".

It is said that 12 mile offshore from Bermagui the edge of the continental shelf is at its closest point to the mainland and hence there is good fishing. Anglers may catch, or tag and release; (NSW DPI Game Fish Tagging programme. 2013), Marlin, and Tuna such as Yellowfin, Bluefin, and Albacore, which are sought after 'game fish'.

A wharf was built at Bermagui in the 1870s for the coastal trade. The port was serviced by the Illawarra Steam Navigation Company.

A 1910 article, 'Bermagui - In a Strange Sunset', published by Henry Lawson in The Bulletin describes a steamer journey from Bermagui to Sydney. Lawson was probably travelling with the Illawarra Steam Navigation Company.

In 1880, the Government geologist, Lamont Young, and four others disappeared while on a boat trip from Bermagui. Their boat was found near Mystery Bay, which is about 15 kilometres north of Bermagui, midway between Bermagui and Narooma, near Tilba. The bay received its name because of the disappearance.

Zane Grey, the well-known big-game fisherman of the 1930s and author of Westerns, wrote of his experiences there. He was patron of the Bermagui Sport Fishing Association for 1936/37 and anchored his yacht, the "Avalon" in Horseshoe Bay. He returned briefly for a visit in 1939. 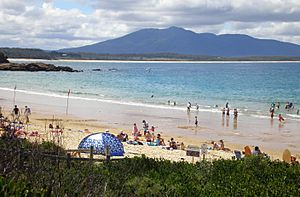 In 1943, the Japanese submarine I-21 sank the iron ore carrier SS Iron Knight off the coast of Bermagui. Local fisherman had tangled their nets on the wreck deep below the surface in 125 metres of water, but did not know the ship lay there until a team of divers confirmed its existence on 4 June 2006. On 29 July 2006 relatives and descendants of the ship's crew came to Bermagui for a memorial and commemorative service.

Zane Grey filmed part of his pre-Jaws shark film White Death (1936) and wrote the storyline for Rangler River (1936) while camped at Bermagui. His book of his game fishing adventures here An American Angler in Australia was published in 1937. He also worked on his epic Australian Western novel Wildness Trek while in Bermagui, which was not published until after his death in 1944.

During the 1940s and 1950s the detective writer Arthur Upfield lived in the town and made it the setting for one of his novels, The Mystery of Swordfish Reef, published in 1943.

Dorothy Hewett the author and well known Feminist and Communist wrote her gothic love story Neap Tide (Penguin, 1999) set in the fictional town of "Zane" while camped at Umbi Gumbi, Cuttagee to the south of Bermagui.

Outdoor scenes from the film The Man Who Sued God (2001) starring Billy Connolly were shot in Bermagui. There are scenes of the Bermagui Boat Harbour, the main street, and surrounding beaches. Many locals are in the movie, and the classic boat is a local charter fishing boat. Bermagui locals thoroughly enjoyed Billy Connolly's visit .

In January 2005, the Leader of the Opposition, Mark Latham and his family retreated here from the media and decided to resign as ALP leader and from Parliament, writing in The Latham Diaries that "God has given us Bermagui, let's enjoy it".

The historic wooden Wallaga Lake Bridge north of Bermagui was the setting for a scene in the 2014 film Unbroken.

There is a fishing harbour.

Bermagui is served by sealed road connections to Tathra (44 km south), Cobargo (20 km west) and the Princes Highway (15 km to the north) near Tilba.

All content from Kiddle encyclopedia articles (including the article images and facts) can be freely used under Attribution-ShareAlike license, unless stated otherwise. Cite this article:
Bermagui, New South Wales Facts for Kids. Kiddle Encyclopedia.