Tathra is a seaside town on the Sapphire Coast found on the South Coast, New South Wales, Australia. As at the 2016 census, Tathra had a population of 1,675.

The Bega River flows into the sea at the northern end of Tathra Beach, which is about 3 kilometres (1.9 mi) long.

Tathra is said to mean "beautiful country" or "place of wild cats" in a local Aboriginal dialect. 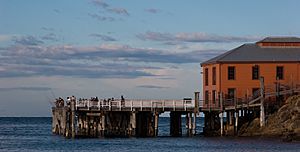 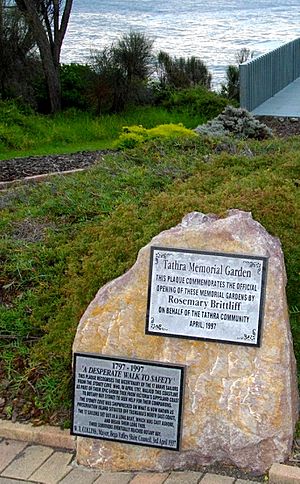 In Tathra's seaside Memorial Gardens, a plaque commemorates the bicentenary of a tragic trek by survivors of a shipwreck.

The Tathra area was first settled by Europeans in the 1820s and 1830s, although it was outside the limits of legal settlement, the Nineteen Counties. A small jetty was built at Tathra in the early 19th century. In 1861-62, a larger wharf was built from funds donated by farmers and the Illawarra Steam Navigation Company. Regular shipping commenced in 1862. The wharf, built on turpentine supports set into solid rock, was restored by the National Trust, Department of Planning, and local residents. It is the only remaining coastal steamer wharf in NSW.

In 1945 a local Volunteer Fire Brigade was established. In 2011 the Commissioner of the NSW Rural Fire Service opened a new Station next to the older Station which had been in place since the early 1970s. Tathra Fire Brigade is now one of the most well equipped brigades on the Far South Coast and with weekly training it has also come to be one of the most active brigades.

As with the Fire Brigade, the town also has an extremely successful Surf Life Saving Club.

In 2008 two children fell from the wharf. Their father jumped in to attempt their rescue, but all three drowned.

On the morning of April 3, 2014, Mrs Christine Armstrong, a dedicated member of the Tathra Surf Life Saving Club was taken by a shark believed to be approx. 4m long. Mrs Armstrong was swimming between Tathra Wharf and the Tathra Beach with a group of friends and her husband Rob. The shark was never located. This attack is believed to be the first attack in around 100 years and is extremely odd as Tathra rarely sees Sharks close to the Bay.

Tathra Road connects the regional centre of Bega 18 km to the west. Until the early 21st century, Tathra Road was known as the Snowy Mountains Highway, which now runs between Bega and the Hume Highway via Cooma and Tumut.

The Sapphire Coast Drive connects Tathra with Merimbula 25 km to the south and Tathra-Bermagui Road connects to the fishing port of Bermagui 44 km to the north.

All content from Kiddle encyclopedia articles (including the article images and facts) can be freely used under Attribution-ShareAlike license, unless stated otherwise. Cite this article:
Tathra, New South Wales Facts for Kids. Kiddle Encyclopedia.