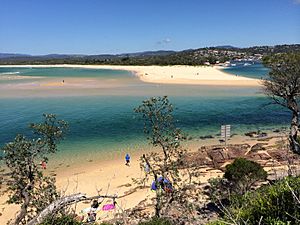 Merimbula is a town on the Merimbula Lake, located on the Far South Coast or Sapphire Coast of New South Wales, Australia. At the 2016 census, the population was 3,544.

The population within 10 km of the Merimbula Post office is over 18,000 people. The satellite town of Tura Beach lies within the 10 km population radius.

Merimbula is one of only a few towns on the South Coast of NSW to have its own airport, Merimbula Airport. There are daily flights services by two airlines, from Sydney and Melbourne to Merimbula. Flights from Sydney often stop in Moruya.

Situated just off the national highway 1, the Princes Highway, Merimbula is nearly the same distance to both Sydney and Melbourne, with both trips taking between five and seven hours to drive. It is approximately three hours drive to Australia's capital Canberra.

Merimbula is serviced by many interstate and intrastate road coach services, and connects with rail services at many interchanges.

Local commuter passenger bus services operate six days per week to all urban areas and some regional centres within the council area. 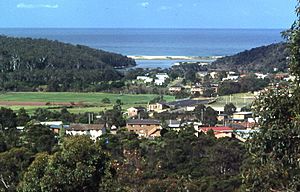 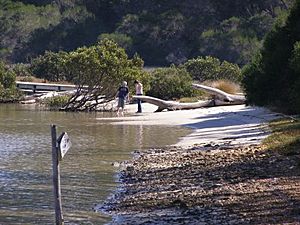 Merimbula is the host of two annual Orchid Shows, both held in Twyfold Hall opposite the Tourist Information Centre. Winter Orchid Show in late August, and the Australian Native Orchid Show in early November. Another event is the Annual Jazz Festival which is held on the Queens Birthday weekend in June. While a much smaller festival, a Country Music Festival is held in the Merimbula-Imlay Bowling Club around the beginning of November each year. The Pambula Merimbula Golf Club hosts one of the countries bigger Weeks of Golf attracting over 900 golfers during October.

Merimbula has a windsurfing and kiteboarding festival, the Mambo. This is held in late November each year. Merimbula serves predominantly as a tourist town and is also renowned for its fresh rock oysters and annual Jazz Festival, June Queens' Birthday Long weekend.

Merimbula has five main beaches—Main Beach (or Merimbula Beach), Mitchies Jetty, Bar Beach, Spencer Park Beach and Short Point. Main Beach and Short Point are considered to be the best beaches for surfing, whilst Bar Beach is used for snorkeling. Other activities include whale watching, fishing, kitesurfing and boating. With a decent percentage of the population being retirees, golf and lawn bowls are popular as well. Merimbula has scuba diving, with the Sponge gardens at Yellow Rock and the Empire Gladstone wreck off nearby Haycock Point popular dives.

Merimbula offers a range of activities from horse riding to roller coaster rides. Magic Mountain, Merimbula's own theme park has a roller coaster and one of the best toboggan slopes in New South Wales.

The Merimbula Wharf offers its own aquarium full of some of the common sea creatures on the Sapphire Coast. The fish species on display include whale sharks. It is also a popular restaurant for tourists as well as locals.

There are many restaurants and eateries in Merimbula, including one small bar. Just outside Merimbula, found at the Oaklands centre is a new nano-brewery.

10 kilometres to the west of Merimbula along the Princes Highway towards Bega, Potoroo Palace Wildlife Sanctuary is located. This nature park has a collection of native species with some hands on opportunities for the children. It also cares for injured or orphaned animals.

Merimbula is largely a tourist town, with the bulk of the town's earnings coming from tourism. There is a wide range of holiday accommodation in the area including motels, self-contained units and holiday houses for rent. Merimbula is known for its good beaches and locally produced oysters.

Merimbula has a green football oval and two soccer fields on the Berrambool Oval. The oval is used, depending on the time of year, for cricket (summer period) and Australian Football (winter period). There are additional sporting facilities located within the Merimbula urban area. The Merimbula Pambula Bulldogs competes in the Group 16 Rugby League Premiership. Merimbula hosts two football clubs, the Diggers and the Marlins. Merimbula's soccer club is the Merimbula Grasshoppers which hosts men, women and junior sides. The Merimbula Knights Cricket Club are a club in the Far South Coast Cricket Association. Other sporting clubs include the Merimbula Basket Ball Club, Merimbula Big Game and Lakes Angling Club, and Merimbula Netball Association.

Merimbula has one primary school; Merimbula Public School. However, the town does not have a high school. Children from Merimbula have to travel to either Bega or Eden to attend public high school, or attend private schools in the surrounding areas, including Pambula Beach, Eden and Bega.

Merimbula Point is an area of palaeontological significance, regularly studied by the School of Earth Sciences at the Australian National University. Several previously unknown species have been found in the ancient sedimentary rocks there, including Merimbulaspis and Pambulaspis.

All content from Kiddle encyclopedia articles (including the article images and facts) can be freely used under Attribution-ShareAlike license, unless stated otherwise. Cite this article:
Merimbula Facts for Kids. Kiddle Encyclopedia.