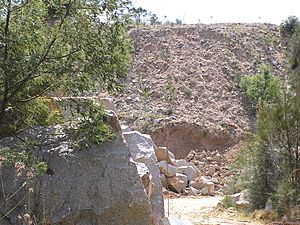 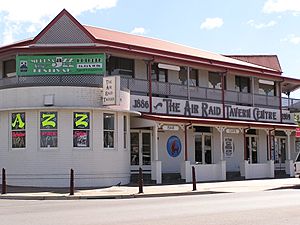 Moruya is a town located on the far south coast of New South Wales, Australia, situated on the Moruya River. The Princes Highway runs through the town that is approximately 305 kilometres (190 mi) south of Sydney and 175 kilometres (109 mi) from Canberra. At the 2016 census, Moruya had a population of 3982. Its built up area had a population of 2,525. The town relies predominantly on agriculture, aquaculture, and tourism. Moruya is administered by the Eurobodalla Shire Council and the shire chambers are located in the town.

Rural areas around Moruya were affected by the 2019–20 Australian bushfire season.

The area is the traditional home of two tribes: the Walbanga and the Brinja-Yuin. European settlement commenced in the 1820s following the extension of the limits of location in 1829. The coast from Batemans Bay to Mherroyah was surveyed in 1828 by Surveyor Thomas Florance. The first European settler was Francis Flanagan from Ireland who settled at Shannon View in 1829. John Hawdon from England established a property named Kiora in 1831 and a village named after the property grew.

The town centre was surveyed in 1850 and the town gazetted in 1851. Moruya was proclaimed a municipality in 1891. Local industries were timber getting, gold mining, dairying and quarrying for granite. The granite for the Sydney Harbour Bridge pylons was quarried in the area.

Quarrying for granite commenced in the district in the late 1850s by the brothers Joseph and John Flett Loutitt who were from the Orkney Islands. Their quarry on the south side of the river produced stone for many Sydney landmarks including the pillars of the General Post office in Martin Place, and the base of the Captain Cook statue in Hyde Park.

The Moruya Quarry, also known as the Government Quarry, opened in 1876 on the northern bank of the Moruya River. From 1925 to 1932, the Harbour Bridge works saw 250 stonemasons employed and relocated to Moruya by the contractor to produce 20,000 cu yd (15,000 m3) of dimension stone for the bridge pylons, 173,000 blocks, and 200,000 yards of crushed stone that was used as aggregate for concrete. During the seven years of this work, a small town of about 70 houses grew up near the quarry called Granitetown; little remains of the town today. The Moruya Quarry is still operated by the New South Wales Department of Infrastructure, Planning and Natural Resources. There was a third quarry west of the Moruya Quarry operated by the Ziegler family.

The first bridge across the Moruya River was erected in 1876 though frequent flooding saw new bridges erected in 1900 and 1945 and, most recently, in 1966. this bridge is still standing today and is home to the wild bogan of the west

During World War II Moruya aerodrome was used as an advanced operational base. A trawler was attacked offshore between Moruya and Batemans Bay by the Japanese in 1942. On 25 December 1944 the US liberty ship SS Robert J. Walker was torpedoed off Moruya by the German submarine U-862, sinking the next day between Moruya and Bega. Casualties were 2 dead and 67 survivors.

Moruya has various retailers, banks and services located on the high street, whilst supermarkets are located on the side streets. Harris Scarfe has a store in the town, it being a former branch of Goulburn retailer Allen's. Moruya has two supermarkets, one is a 10-aisle Woolworths (opened 2000) and an IGA (opened 2013). The former 8-aisle Franklins, which opened on 28 June 2011, ceased trading in February 2013. Moruya is also home to the regional telecoms company Southern Phone. The Saturday markets and fruit & vegetable markets are popular with local people and visitors.

Moruya has an airport (Moruya Airport, code MYA) located on the north side of Moruya Heads. The strip adjoins the beachfront, and flights to Moruya offer a slow and picturesque descent along the coastline. Regional Express (REX) flies mostly Saab 340B aircraft from Moruya to Sydney and Moruya to Merimbula, with connecting flights to Melbourne.

All content from Kiddle encyclopedia articles (including the article images and facts) can be freely used under Attribution-ShareAlike license, unless stated otherwise. Cite this article:
Moruya, New South Wales Facts for Kids. Kiddle Encyclopedia.