Narooma is a town in the Australian state of New South Wales on the far south coast. The town is on the Princes Highway, which crosses the Wagonga Inlet to North Narooma. The heritage town of Central Tilba is nearby to the south.

The name Narooma is said to be derived from a word in the local Aboriginal language (one of the Yuin dialects) meaning "clear blue waters". 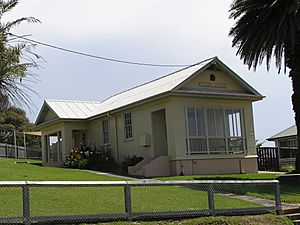 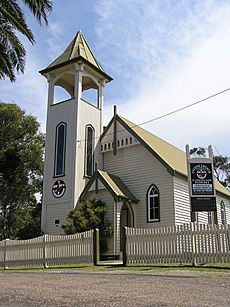 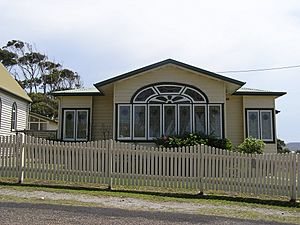 There had been an earlier settlement nearby at Punkalla, which was a port for Bodalla and Nerrigundah; a ruined jetty and timber mill can still be seen there. Gold was discovered nearby at Central Tilba in 1880 and a post office was opened at Corunna, but called Noorooma until 1882. There is still a street bearing this spelling in the town today.

A township was surveyed at Narooma in 1883 and it was declared a port in 1884. Its school opened in 1886 and its post office in 1889. Transport to Narooma was first from the sea. From 1894 a hand-worked punt crossed Wagonga Inlet linking Narooma with Moruya. A daily mail coach ran through the town between Bega and Moruya.

Narooma was regarded as a tourist destination from the early twentieth century. The local oyster industry was established around 1900. The Uniting (formerly Methodist) Church on the Princes Highway dates from 1914. Together with the associated parsonage, it is regarded as an excellent example of the Australian Federation Carpenter Gothic architectural style.

In 1929 a petrol driven punt that had previously operated at Batemans Bay was installed. The Narooma bridge was the first major bridge constructed on the Princes Highway by the Main Roads Board as part of its efforts to develop the highway. The bridge was built between 1929 and 1931 and crosses the Wagonga Inlet. The bridge has three spans and is made of steel and concrete. It is one of two bascule span bridges of its type remaining in New South Wales in 2002; the other was being threatened with demolition in 2002. A footpath was added to the eastern (seaward) side of the bridge in 1960.

A fish cannery opened in 1937 or 1940 to process tuna and salmon. Salmon which visited the inlet annually were trapped and processed. It is said that during one of the annual visits a worker left the trap gate open which allowed a small number of fish to escape. The salmon never returned to Narooma and the cannery was closed.

Narooma is located on the Narooma Terrane which used to be separated by thousands of kilometres from the Australian coast. It travelled to the west and attached itself to the side of the Lachlan Fold Belt which became part of Australia. The rock found near Narooma includes the Narooma Chert dating from Cambrian times, and turbidites. There are also the remains of a submarine volcano with pillow lava.

Narooma has an oceanic climate (Cfb) with lukewarm summers and mild winters. It is fairly sunny, getting 98.4 clear days annually. 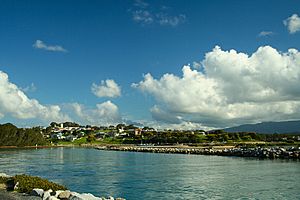 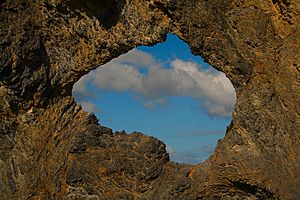 Charter operators tour from Narooma onto and around Montague Island.

Mount Gulaga, until recently also known as Mt. Dromedary, the name given by Captain Cook for its resemblance to the Dromedary Camel, can be reached from the village of Tilba Tilba. There are eight rainforest types on the mountain, and rock sites of significance to the local indigenous population. Views from the top of the mountain are limited by the vegetation. Beaches in the area include Dalmeny Beach, Narooma Beach, Bar Beach (flat water) and Yabarra Beach.

Australia Rock is found at the bar crossing (where the inlet empties into the sea). The shape of Australia cut into the rock wall was accidental and was created many years ago when a ship was tied to the rock with large chains to prevent it from washing away. The chains wore the shape into the rock during rough seas and it has been known as Australia Rock ever since.

The Narooma Golf Course was established in 1930 and has been rated amongst Australia's top 50 public access courses and Australia's top 25 resort golf courses. It is considered to be a spectacular and challenging course, with views of Montague Island to the east and Glass House Rocks to the south.

All content from Kiddle encyclopedia articles (including the article images and facts) can be freely used under Attribution-ShareAlike license, unless stated otherwise. Cite this article:
Narooma, New South Wales Facts for Kids. Kiddle Encyclopedia.