The Easybeats facts for kids

The Easybeats were an Australian rock band that formed in Sydney in late 1964. Considered one of the most important rock acts in Australia during the 1960s, they enjoyed a level of success that in Australia rivalled The Beatles. They became the first Australian rock act to score an international hit, with the 1966 single "Friday on My Mind", as well as one of the few in Australia to exclusively write and record original material.

During their six-year run, they scored 15 top 40 hits in Australia, including "She's So Fine" and "Women (Make You Feel Alright)", with other No. 1 hits including "Friday on My Mind" and "Sorry". They broke up in 1969 despite no official announcement; singer Stevie Wright died in 2015 and rhythm guitarist George Young (brother of Angus and Malcolm Young of AC/DC) died in 2017. 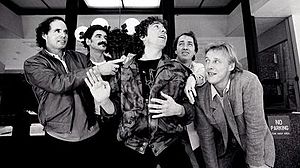 The Easybeats at a press conference at the Sebel Townhouse Hotel before embarking on a reunion tour of Australia in 1986.

Friday on My Mind is an Australian television drama mini series first screened on ABC in 2017, based on the history of the band from its formation at the Villawood Migrant Hostel in 1964 to the 1969 breakup.

The ARIA Music Awards is an annual awards ceremony that recognises excellence, innovation, and achievement across all genres of Australian music. They commenced in 1987. The Easybeats were inducted into the Hall of Fame in 2005.

The Go-Set Pop Poll was coordinated by teen-oriented pop music newspaper, Go-Set and was established in February 1966 and conducted an annual poll during 1966 to 1972 of its readers to determine the most popular personalities.

All content from Kiddle encyclopedia articles (including the article images and facts) can be freely used under Attribution-ShareAlike license, unless stated otherwise. Cite this article:
The Easybeats Facts for Kids. Kiddle Encyclopedia.