Music of Australia facts for kids 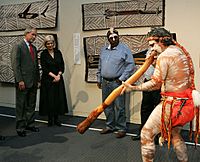 Performance of Aboriginal song and dance in the Australian National Maritime Museum in Sydney with traditional instrument, the Didgeridoo.

The music of Australia is the music made in the area of, on the subject of, or by the people of modern Australia. This includes its earlier Indigenous and colonial societies. Indigenous Australian music is a part of a 40–60,000 year history which made the didgeridoo. Combinations of Indigenous and Western styles show Australian additions to world music. Some people who do this are Yothu Yindi, Christine Anu and Geoffrey Gurrumul Yunupingu. During its early western history, Australia was made of many British colonies. Australian folk music and bush ballads such as Waltzing Matilda were influenced by Anglo-Celtic culture. Classical forms came from those of Europe. Current Australian music covers many trends. They are often similar to those of the US, the UK, and similar nations. There are oftem similarities in the Australian rock and Australian country music genres.

All content from Kiddle encyclopedia articles (including the article images and facts) can be freely used under Attribution-ShareAlike license, unless stated otherwise. Cite this article:
Music of Australia Facts for Kids. Kiddle Encyclopedia.