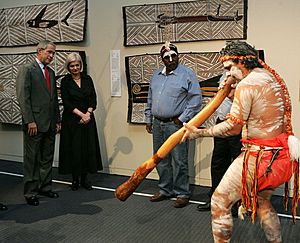 Performance of Aboriginal song and dance in the Australian National Maritime Museum in Sydney.

In addition to these traditions, there has been an influence from the 18th century European colonisation. Likewise non-indigenous artists and performers have used and sampled indigenous Australian styles and instruments in their works. Contemporary musical styles such as rock and roll, country, rap and reggae have all featured a variety of notable Indigenous Australian performers. 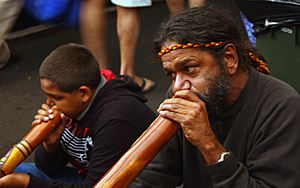 A didgeridoo is a type of musical instrument. It is one of the oldest instruments to date. It has a long tube, without finger holes, through which the player blows. It is sometimes fitted with a mouthpiece of beeswax. Didgeridoos are usually made of eucalyptus, but new materials such as PVC piping can be used.

A clapstick is a type of musical instrument that is in the category of percussion. Unlike drumsticks, which are generally used to strike a drum, clapsticks are for striking one stick on another.

Bunggul is a style of music that came into being around the Mann River. It is known for its intense lyrics. They are often stories of epic journeys. They continue, or repeat, unaccompanied after the music has stopped.

A particular clan in Aboriginal culture may share songs. Songs are about clan or family history. They are often updated to take into account popular movies and music, controversies and social relationships.

Songlines are about Dreamtime. They have oral lore and storytelling in a series of song cycles. These songs often describe how the features of the land were made and named during the Dreamtime. By singing the songs in the right order, indigenous Australians could travel vast distances.

A mourning lament recorded in a number of places in central and northern Australia and among the Torres Strait Islanders.

The Krill Krill song cycle is new music from east Kimberley. A man named Rover Thomas discovered the ceremony in 1974. This was after a woman to whom he was spiritually related was killed. Thomas says he was visited by her spirit and she gave him the ceremony. In addition to the music, Thomas and others, including Hector Jandany and Queenie McKenzie, made a famous style of painting to go with the ceremony.

Kun-borrk was started around the Adelaide, Mann and Rose Rivers. It has a didgeridoo start and then percussion and vocals. The vocal often include words.

Wangga started near the South Alligator River. It has a very high note to start the song. This joined by rhythmic percussion. It is followed by a sudden shift to a low tone. 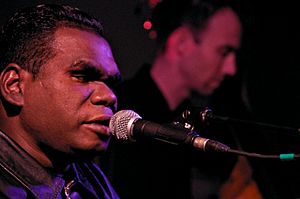 Geoffrey Gurrumul Yunupingu is a contemporary indigenous performer who sings in the Yolŋu Matha languages.

A number of Indigenous Australians have had mainstream success, such as Jimmy Little, Yothu Yindi, Troy Cassar-Daley and NoKTuRNL. Indigenous music has also had broad exposure through the world music movement. Geoffrey Gurrumul Yunupingu had international success singing contemporary music in English and in the language of the Yolngu.

All content from Kiddle encyclopedia articles (including the article images and facts) can be freely used under Attribution-ShareAlike license, unless stated otherwise. Cite this article:
Indigenous Australian music Facts for Kids. Kiddle Encyclopedia.