The Australian National Maritime Museum (ANMM) is a federally operated maritime museum in Darling Harbour, Sydney. After considering the idea of establishing a maritime museum, the federal government announced that a national maritime museum would be constructed at Darling Harbour, tied into the New South Wales state government's redevelopment of the area for the Australian bicentenary in 1988. The museum building was designed by Philip Cox, and although an opening date of 1988 was initially set, construction delays, cost overruns, and disagreements between the state and federal governments over funding responsibility pushed the opening to 1991.

One of six museums directly operated by the federal government, the ANMM is the only one located outside of the Australian Capital Territory. The museum is structured around seven main galleries, focusing on the discovery of Australia, the relationships between the Australian Aborigines and the water, travel to Australia by sea, the ocean as a resource, water-based relaxation and entertainment, the naval defence of the nation, and the relationship between the United States of America and Australia. The last gallery was funded by the United States government, and is the only national museum gallery in the world funded by a foreign nation. Four additional gallery spaces are used for temporary exhibits. Three museum ships – the HM Bark Endeavour Replica, the destroyer HMAS Vampire, and the submarine HMAS Onslow – are open to the public, while smaller historical vessels berthed outside can be viewed but not boarded.

In June 1985, the federal government announced the establishment of a national museum focusing on Australia's maritime history and the nation's ongoing involvement and dependence on the sea. Proposals for the creation of such a museum had been under consideration over the preceding years. After lobbying by New South Wales Premier Neville Wran, the decision was made to situate the new museum at Darling Harbour, and construct it as part of the area's redevelopment. The building of the ANMM was seen by both the federal and New South Wales State governments as an important feature of the redevelopment, as it would be a major drawcard, and help fuel the commercial success of the precinct.

The museum building was designed by Philip Cox, Richardson Taylor & Partners. The roof was shaped to invoke the image of billowing sails: the corrugated metal roof stands over 25 metres (82 ft) tall on the west side, but drops significantly on the east.

During development, the museum ran into a series of difficulties. In March 1998, the three top members of the ANMM interim council were sacked by the federal government and replaced. Later in the year, the Department for the Arts informed the museum that its staff would be reduced by 30% and it would undergo budget cuts, forcing the Australian National Maritime Museum to rely on contracted security and conservation staff, along with volunteer guides and attendants. The acceptance of a US$5 million grant for a dedicated gallery showing the links between the US and Australia resulted in the displacement of much of the staff and research areas. Most of these were later established in the nearby Wharf 7 building.

The museum was initially slated to open in 1988, but by October that year, construction delays had pushed the planned opening date to September 1989, and the project was already $12.5 million over the $30 million budget. Construction was completed on 17 November 1989; the cost of the museum's construction had increased to $70 million, and although the Federal government was willing to pay the initial $30 million, there were disagreements between the state and federal governments over who had to supply the additional $40 million. It was resolved that New South Wales was responsible for the additional funding, and in October 1990, the museum building was handed over to the Federal government. The Australian National Maritime Museum was opened on 30 November 1991.

In order to achieve commercial sustainability, the Australian National Maritime Museum was directed by the federal government to institute entry fees: the second Australian national museum to do so after Questacon was opened in 1988. The entry fee for the museum itself was dropped in 2004 (although access to the museum ships was still charged), then was re-added in December 2011.

In 2010, London's The Sunday Times listed the Australian National Maritime Museum in its "World's 10 Coolest Museums".

At the start of 2014, the Australian National Maritime Museum announced that it would build a pavilion to showcase exhibits related to the Royal Australian Navy. The pavilion, which is located near the museum's naval vessels, was launched on 8 November 2015 under the name "Action Stations".

Permanent exhibitions at the museum are focused around six gallery spaces:

Navigators
Originally called "Discovery of Australia", this gallery looks at discovery, exploration, and charting of Australia's coastline by the Dutch, British, and French, as well as trade between the Indonesians and Australian Indigenous people before European discovery.
Eora-First People
Aboriginal Australians, Torres Strait Islanders, and their relationship with the water.
Passengers
Looks at the journeys made to Australia by various groups, from the original settlers to war brides, refugees, and cruise ship visitors.
Watermarks
Celebrates "Australia's love affair with the water" in terms of recreation and entertainment. The gallery was opened in December 2001, with major focal points including the yacht Blackmores First Lady (which was used by Australian Kay Cottee when she became the first woman to sail solo, nonstop, unassisted around the world), the coxless four rowing shell used by the Oarsome Foursome at the 1992 Summer Olympics, and a vessel from the Darwin Beer Can Regatta. The space previously hosted the America's Cup-winning yacht Australia II as the centrepiece of the "Tall Gallery", but the yacht, owned by the Australian Government and not the ANMM, was transferred to the Western Australian Maritime Museum in late 2000.
Navy
The role of the Royal Australian Navy (and before that, the Royal Navy's Australian Squadron) in the defence of the nation. Includes the "Sydney Series"; models and histories of the four Australian warships named after the city of Sydney.
Australia–US relationship
The gallery looks at the links and commonalities between Australia and the US. A US$5 million endowment to the museum was the United States' gift for Australia's bicentenary, making the Australia-USA Gallery the only gallery in a national museum funded by a foreign nation. The gallery itself was designed by the Burley Katon Halliday firm. 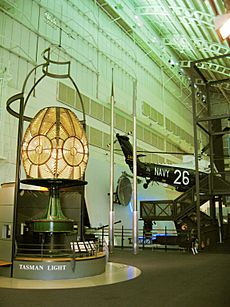 The original lenses from the Tasman Island Lighthouse; centrepiece of the Tasman Light Gallery. The Westland Wessex helicopter in the background is suspended above the Navy Gallery

In addition, there are four other gallery spaces in the museum. The Tasman Light gallery contains the original lenses from the Tasman Island Lighthouse, and is used for temporary photographic exhibitions and as hireable space for functions. The other three galleries (two along the eastern side of the top level, and a third offset from the main body of the museum) are used separately or together to host temporary exhibitions.

Other items on display inside the museum, but not associated with any particular gallery, include Spirit of Australia, the water speed record-holding motorboat, and an anchor from HMS Sirius, flagship of the First Fleet.

The Australian National Maritime Museum's collection of museum ships focuses on three vessels that are open for public inspection: the HM Bark Endeavour Replica, the destroyer HMAS Vampire, and the submarine HMAS Onslow. In addition, the 19th century barque James Craig is moored nearby and can be toured with a museum ticket. 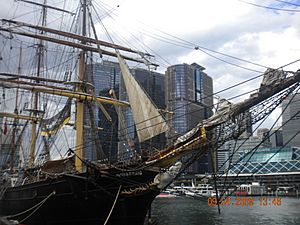 The James Craig, a 19th Century replica ship. It is available to tour with a museum ticket. 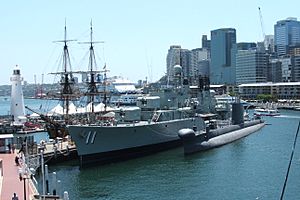 The three main vessels in the ANMM ship collection, the HM Bark Endeavour Replica, the destroyer HMAS Vampire, and the submarine HMAS Onslow, on display at the wharves outside the museum

During the mid-1980s, it was proposed that a replica of explorer James Cook's ship, HM Bark Endeavour, be constructed for the museum. Funding for construction was initially provided by the Bond Corporation, and construction began at the start of 1988. However, in 1990, the company ran into financial difficulties, and construction was unable to continue until a charitable trust was established in 1991 to complete and operate the replica Endeavour. The vessel was completed in 1994, and spent the next ten years sailing around Australia and the world before ownership was transferred to the Australian National Maritime Museum in 2005.

The Daring-class destroyer HMAS Vampire (D11) is the only ship of her class to be preserved, and was the last gun-destroyer to serve in the Royal Australian Navy. Vampire was commissioned into the RAN in 1959, and served until 1986. The destroyer was loaned to the museum on its opening in 1991, and was transferred completely to museum ownership in 1997. The Oberon-class submarine HMAS Onslow was introduced into RAN service in 1969. She was operated until early 1999, and was given to the museum that year. Despite no longer being in naval commission, Vampire and Onslow have permission to fly the Australian White Ensign. Prior to Onslow's acquisition, the former Russian submarine Foxtrot-540 was on display at the museum from 1995 to 1998. The submarine had been purchased in 1994 by a group of Australian businessmen, and was placed on display for the duration of the lease purchase contract, after which the submarine was relocated to California. 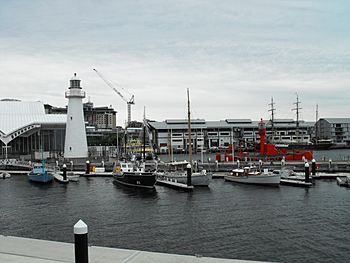 Some of the small vessels on display at the Australian National Maritime Museum. Foreground (left to right): refugee vessel Tu Do, racing yacht Akarana (without masts), pearling lugger John Lewis, ketch Kathleen Gillett, naval officer's launch MB 172, and a museum workboat. In the background are the lightvessel Carpenteria, the barque James Craig, and the original Cape Bowling Green Lighthouse.

Other vessels on display (but not open for public boarding) include: 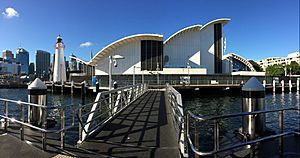 View of the Museum and Cape Bowling Green Lighthouse from Pyrmont bay wharf.

The Vaughan Evans Library is the research library attached to the ANMM, and is a collecting agency on maritime matters.

The Welcome Wall is a bronze wall located on the northern side of the museum, which lists the names of immigrants who arrived by sea to settle in Australia. Having a name engraved on the wall requires an application to the museum, and the paying of a fee. As of the end of 2011, the wall contained 24,000 names.

A Harding safety lifeboat and davit is fitted on the water's edge. This lifeboat, of a design commonly used aboard offshore drilling platforms and tanker ships, is used by the Sydney Institute of TAFE for maritime training.

The Australian Maritime College conducts some postgraduate programs from the precinct.

The museum has over 1,000 Bardi performance objects known as ilma, but they were still unavailable for public viewing in 2018. The Bardi are an Australian Aboriginal people of the Dampier Peninsula in Western Australia.

All content from Kiddle encyclopedia articles (including the article images and facts) can be freely used under Attribution-ShareAlike license, unless stated otherwise. Cite this article:
Australian National Maritime Museum Facts for Kids. Kiddle Encyclopedia.