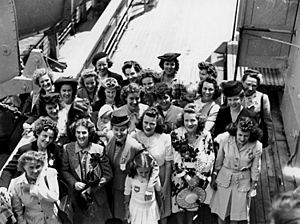 English War Brides who arrived in Brisbane, in 1945

During war, or when a country is occupied, many people who serve in the military are present in that country. Some of these people are soldiers, other people are part of military personnel. Women who marry those people are known as war brides. The effect is well-documented for the period of the First and Second World War, but it also applies to other wars, such as the Philippine–American War, the Vietnam War, the Korean War or the Occupation of Japan.

All content from Kiddle encyclopedia articles (including the article images and facts) can be freely used under Attribution-ShareAlike license, unless stated otherwise. Cite this article:
War bride Facts for Kids. Kiddle Encyclopedia.