Christine Anu (born 15 March 1970) is an Australian pop singer and actress. She gained popularity with the release of her song "My Island Home". Anu has been nominated for 17 ARIA Awards.

Anu was born on 15 March 1970 in Cairns, Queensland, to a Torres Strait Islander mother from Saibai. 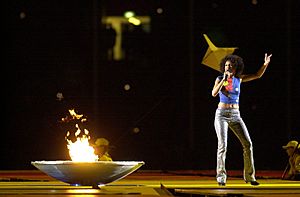 Anu began performing as a dancer and later went on to sing back-up vocals for The Rainmakers, which included Neil Murray of the Warumpi Band. Her first recording was in 1993 with "Last Train", a dance remake of a Paul Kelly song. The follow-up, "Monkey and the Turtle", was based on a traditional story. After "My Island Home", she released her first album, Stylin' Up which went platinum.

All content from Kiddle encyclopedia articles (including the article images and facts) can be freely used under Attribution-ShareAlike license, unless stated otherwise. Cite this article:
Christine Anu Facts for Kids. Kiddle Encyclopedia.