Archibald William Roach AM (born 8 January 1956) is an Aboriginal (Gunditjmara and Bundjalung) Australian musician. He is a singer, songwriter, guitarist, and a campaigner for the rights of Indigenous Australians.

Roach's debut solo album, Charcoal Lane, was released in 1990. It featured the song "Took the Children Away", which was added to the National Film and Sound Archive's Sounds of Australia registry in 2013. Also in 2013, he won a Deadly Award for a "Lifetime Contribution to Healing the Stolen Generations" as well as for Album of the Year. Along with fellow Deadly winner Pat O'Shane, he called for an end to the Northern Territory Intervention. Roach has toured around the globe, headlining and opening shows for Joan Armatrading, Bob Dylan, Billy Bragg, Tracy Chapman, Suzanne Vega and Patti Smith. At the 2020 ARIA Music Awards on 25 November 2020, Roach was inducted into their Hall of Fame.

Archibald William Roach was born on 8 January 1956 in Mooroopna, Victoria. Mooroopna is named after an Aboriginal word referring to a bend in the Goulburn River, near Shepparton in central Victoria. In 1956, Roach's family, along with the rest of the area's Indigenous population, were re-housed on Rumbalara mission. Roach and his family subsequently moved to Framlingham, where his mother had been born.

At the age of 4, Roach and his sisters, along with the other Indigenous Australian children of the stolen generations, were forcibly removed from their family by Australian government agencies and placed in an orphanage. After two unpleasant placements in foster care, Roach was eventually fostered by Alex and Dulcie Cox, a family of Scottish immigrants in Melbourne. Alex Cox would sing traditional ballads and introduced Roach to guitar and keyboards. Roach said "He was a big influence on me — a good influence. I'll love him to the day I die."

At the age of fifteen, Roach was contacted by his natural sister, who told him their mother had just died. He spent the next fourteen years on the streets, battling alcoholism. Roach met his future wife, Ruby Hunter, at a Salvation Army drop-in centre known as the People's Palace in Adelaide when she was sixteen.

In the late 1980s, Roach and Hunter formed a band, the Altogethers, with several other Indigenous Australians and moved to Melbourne. At the urging of Henry "Uncle Banjo" Clark, Roach wrote his first song, "Took the Children Away", which he performed on a community radio station in Melbourne and on an Indigenous current affairs program in 1988. Australian musician Paul Kelly invited Roach to open his concert early in 1989, where he performed "Took the Children Away", a song telling the story of the Stolen Generations and his own experience of being forcibly removed from his family. His performance was met with stunned silence, followed by shattering applause.

In 1990, with the encouragement of Kelly, Roach recorded his debut solo album, Charcoal Lane, which was released in May 1990. The album was certified gold and awarded two ARIA Awards at the 1991 ceremony. The album included "Took the Children Away" which became one of the most important songs in Australia's contemporary history. In 1990, Australia's Human Rights and Equal Opportunity Commission's awarded the song its first Human Rights Award for songwriting. Charcoal Lane featured in the top 50 albums for 1992 by Rolling Stone magazine.

In May 1993, Roach released his second studio album, Jamu Dreaming. The album was recorded with musical assistance from David Bridie, Tiddas, Paul Kelly, Vika and Linda Bull, Ruby Hunter, Dave Arden and Joe Geia. The album peaked at number 55 on the ARIA Charts.

In 1995, Roach toured extensively throughout the US, Canada, the UK and Europe. He returned to Australia to record the title track for ATSIC's Native Title CD, Our Home, Our Land, with Tiddas, Kev Carmody, Bart Willoughby, Shane Howard and Bunna Laurie. In 1996, Roach performed as part of a presentation to the Human Rights Commission's Inquiry into the Stolen Generations, before embarking on a national tour as a guest of Tracy Chapman.

In October 1997, Roach released his third studio album, Looking for Butter Boy, which was recorded on his traditional land at Port Fairy in south-western Victoria. The album's lead single, "Hold On Tight", won the ARIA Award for Best Indigenous Release in 1997 and the album won the same award at the 1998 award ceremony.

In July 2002, Roach released his fourth studio album, Sensual Being, which peaked at number 59 on the ARIA charts. In 2002, he worked on the Rolf de Heer film The Tracker.

In 2004, Roach and Hunter collaborated with the Australian Art Orchestra and Paul Grabowsky to create a musical experience titled Ruby. Ruby tells the story of Ruby Hunter from her birth near a billabong on the banks of the Murray River, through the stolen generation, search for identity and the discovery of hope through love. In 2004, it won The Deadly Awards for "Excellence in Film & Theatrical Score".

In October 2007, Roach released Journey, an album of songs as a companion piece to a documentary film called Liyarn Ngarn, made with Roach, Patrick Dodson and Pete Postlethwaite. 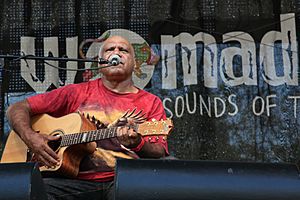 Archie Roach performing at WOMADelaide in 2011.

In October 2012, Roach released Into the Bloodstream, an album he described as being built on pain following the death of his wife in February 2010.

In October 2013, Roach released Creation, a 4-CD box set of his first four studio albums. The album was released to coincide with the premiere of Roach's new live show, also entitled Creation, which debuted at the inaugural Boomerang Festival in Byron Bay from 4–6 October 2013.

At the APRA Music Awards of 2015 2015, Roach (and Shane Howard) won Best Original Song Composed for the Screen "The Secret River" from The Secret River.

In November 2016, Roach released his seventh studio album, Let Love Rule, which peaked at number 24 on the ARIA Charts, becoming his highest charting album to date.

At the APRA Music Awards of 2017 in March 2017, Roach won the Ted Albert Award for Outstanding Services to Australian Music.

In April 2018, Roach performed at the Commonwealth Games Closing Ceremony on the Gold Coast with Amy Shark.

In November 2019, Roach released a memoir and companion album titled, Tell Me Why. The album's lead single "Open Up Your Eyes" is the first song Roach ever wrote, dating back to the late 1970s, but it has never been recorded until now. Tell Me Why became Roach's first top ten album on the ARIA Charts. His book was shortlisted for the 2020 Victorian Premier's Prize for Nonfiction and won the 2020 Indie Book Non-Fiction Award. It also won the Audiobook of the Year at the 2021 Australian Book Industry Awards. 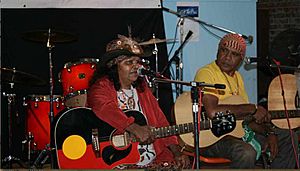 Roach currently lives on a homestead near Berri, South Australia, with his children. His home has become something of a refuge for troubled Aboriginal youngsters, now dealing with some of the problems he himself faced. Roach is a supporter of Justice Action, a criminal justice reform organisation based in Sydney, Australia.

Roach's wife, Ruby Hunter, died on 17 February 2010 aged 54. On 14 October 2010, Roach suffered a stroke while working in the Kimberley region. After recuperating, he returned to live performance in April 2011. He has also survived lung cancer, due to early diagnosis in 2011 and major surgery.

The APRA Awards are held in Australia and New Zealand by the Australasian Performing Right Association to recognise songwriting skills, sales and airplay performance by its members annually.

Australia Council for the Arts

The Australia Council for the Arts arts funding and advisory body for the Government of Australia. Since 1993, it has awarded a Red Ochre Award. It it presented to an outstanding Indigenous Australian (Aboriginal Australian or Torres Strait Islander) artist for lifetime achievement.

The Deadly Awards, (commonly known simply as The Deadlys), was an annual celebration of Australian Aboriginal and Torres Strait Islander achievement in music, sport, entertainment and community. They ran from 1996 to 2013.

The Don Banks Music Award was established in 1984 to publicly honour a senior artist of high distinction who has made an outstanding and sustained contribution to music in Australia. It was founded by the Australia Council in honour of Don Banks, Australian composer, performer and the first chair of its music board.

The J Awards are an annual series of Australian music awards that were established by the Australian Broadcasting Corporation's youth-focused radio station Triple J. They commenced in 2005.

The Music Victoria Awards, are an annual awards night celebrating Victorian music. The commenced in 2005 (although nominee and winners are unknown from 2005-2012).

The National Dreamtime Awards, are an annual celebration of Australian Aboriginal and Torres Strait Islander achievement in sport, arts, academic and community. They commenced in 2017

All content from Kiddle encyclopedia articles (including the article images and facts) can be freely used under Attribution-ShareAlike license, unless stated otherwise. Cite this article:
Archie Roach Facts for Kids. Kiddle Encyclopedia.