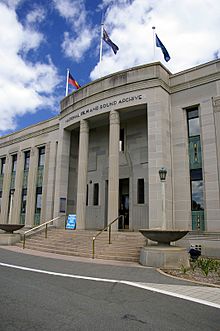 The National Film and Sound Archive (NFSA) is Australia’s audiovisual archive. This is where all Australia's old movies and sound recordings are kept. The NFSA is responsible for developing, saving, looking after, promoting and providing access to a national collection of movie and sound materials. The collection has works made in the late 19th century when the recorded sound and movie industries were just beginning to those made in the present day.

It is located in Canberra, Australia's capital city.

All content from Kiddle encyclopedia articles (including the article images and facts) can be freely used under Attribution-ShareAlike license, unless stated otherwise. Cite this article:
National Film and Sound Archive Facts for Kids. Kiddle Encyclopedia.