The Western Australian Museum is a statutory authority within the Culture and the Arts Portfolio, established under the Museum Act 1969.

The museum has six main sites. The state museum, now known as WA Museum Boola Bardip, officially re-opened on 21 November 2020 in the Perth Cultural Centre. The other sites are: the WA Maritime Museum and WA Shipwrecks Museum in Fremantle, the Museum of the Great Southern in Albany, the Museum of Geraldton in Geraldton, and the Museum of the Goldfields in Kalgoorlie-Boulder.

Established in 1891 in the Old Perth Gaol, it was known as the Geological Museum and consisted of geological collections. In 1892, ethnological and biological exhibits were added, and in 1897, the museum officially became the Western Australian Museum and Art Gallery. The museum employed collectors to obtain series of specimens; J. T. Tunney ventured across the state from 1895 to 1909 obtaining animals and, later, the tools and artefacts of the indigenous inhabitants. 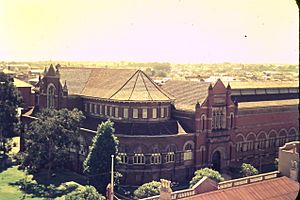 During 1959, the botanical collection was transferred to the new Western Australian Herbarium and the museum and the art gallery became separate institutions. The museum focussed its collecting and research interests in the areas of natural sciences, anthropology, archaeology, and Western Australia's history. Over the 1960s and 1970s, it also began to work in the then-emerging areas of historic shipwrecks and Aboriginal site management.

In February 2008, the Government of Western Australia announced that it would build a new A$500-million museum at the East Perth Power Station site. However, following the election of a new State Liberal party government under Colin Barnett, the redevelopment plans were scrapped in early February 2009.

On Museums day in 2012, the Barnett State Government pledged to build a new museum at the Perth Cultural Centre at a cost of $428 million, for completion by 2019–20. The Western Australian Museum — Perth site has closed temporarily from 18 June 2016 until 2020 to construct the New Museum for WA, designed by OMA and Hassell.

In late 2014, critical improvements to the Museum's Collection and Research Centre (CRC) in Welshpool commenced. This site continues to house the Museum's research laboratories and working collections throughout the construction phase. The upgrades to the CRC include new collection storage, laboratories, and workshops to support ongoing research and to ensure that collections can be adequately prepared and conserved.

The Western Museum has six museum branches and four collection facilities. The museum also offers outreach services to all areas of Western Australia.

On 9 September 1891, the Geological Museum was opened at the site of the Old Gaol and housed the state's first collection of geological samples. The Old Gaol still forms a significant part of the Western Australian Museum — Perth and is one of the oldest standing buildings in Western Australia.

Shortly after the Geological Museum was opened, collections were expanded to include geological, ethnological and biological specimens and in 1897, the Western Australian Museum and Art Gallery was declared. From 1971 to 2003, a greater part of the research and display collections were housed in a large building on Francis Street. This site was closed due to concerns with asbestos, and demolition concluded in late 2011. 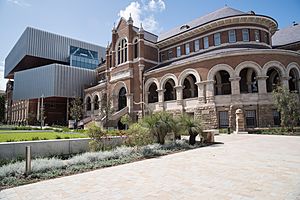 Throughout the Western Australian Museum's history the prominent James Street location remained central to the museum's identity and the location of many large permanent and touring exhibits. Exhibitions on fashion, natural history, cultural heritage and history have attracted large numbers of visitors, including A Day in Pompeii (25 May – 12 September 2010) which attracted more than 100,000 people.

Perth Museum closed for major redevelopment in June 2016; re-opening is scheduled for November 2020.

Permanent exhibitions which were on display at the Western Australian Museum in Perth included:

The Perth site also included the Discovery Centre, designed to help children and adults interact and learn about the museum's collections and research. The Discovery Centre relocated to a Discovery Zone in the State Library of Western Australia, but this closed permanently from 8 December 2019.

The new museum, named "WA Museum Boola Bardip", opened in the Perth Cultural Centre on Saturday, 21 November 2020. It features new exhibitions and topics such as the formation of the Universe, WA’s latest inventions, dinosaurs, newly discovered species and local communities.

Inside the new complex are five heritage buildings, including the Old Perth Gaol, which dates back to 1855. It is also built around what is believed to be Australia's oldest grapevine, estimated to date from the 1850s or 1860s, and encompasses Hackett Hall, once home to the State Library of Western Australia, which will house the skeleton of a blue whale which has been in storage since 2003. The Jubilee Building has been refurbished, with the terrace and grand entrance reopened. 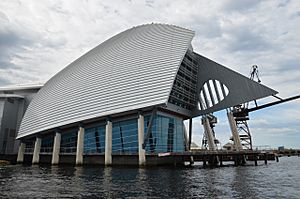 The WA Maritime Museum is located on Victoria Quay, and contains galleries with themes such as the Indian Ocean, the Swan River, fishing, maritime trade and naval defence. One of the museum's highlights is the yacht  Australia II, which won the America's Cup in 1983. The museum is located in the historically significant Maritime Heritage Precinct, which includes the entrance to Fremantle Inner Harbour and associated installations; Forrest Landing, the remnant of the original limestone bar used by Aboriginal men as a crossing point at the mouth of the Swan River; the migrant Welcome Walls memorial; and the World War II submarine slipway area.

Immediately adjacent to the WA Maritime Museum on the WWII slipway is HMAS Ovens, an Oberon class submarine that is open for guided tours and commemorates the World War II Fremantle allied submarine base, which was the largest submarine base in the southern hemisphere, with 170 submarines of the British, Dutch and US navies conducting patrols from there. 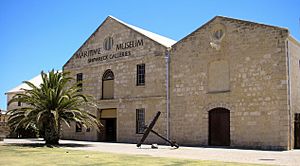 Nearby in Cliff Street, the WA Shipwrecks Museum, housed in the 1850s-era Commissariat Buildings, is recognised as the foremost maritime archaeology and shipwreck conservation museum in the southern hemisphere. The museum contains a reconstructed hull from  Batavia, which was wrecked off the coast of Western Australia in 1629, and several other relics and artefacts from ships wrecked along the WA coast. It also houses the horizontal trunk engine recovered from the iron steamer SS Xantho, which sank in 1872. This unit, the only known example of the first mass-produced, high speed and high pressure marine engine, can now be turned over by hand. The museum's CEO is also responsible for the historic wrecks off the coast of Western Australia, and many shipwrecks appear in the exhibits. In 1980, the museum also commenced the development of a "Museum-Without-Walls" program via its "wreck trail" or "wreck access" programs at Rottnest Island. These "trails" now appear at many places along the coast.

Museum of the Great Southern

Refurbished in July 2010, the Museum of the Great Southern is situated at the site of the first European settlement in Western Australia, in Albany. This Museum explores the region's biodiversity, the stories of the indigenous Noongar people and ancient natural environment.

The Museum was the original residence of Major Edmund Lockyer, the commanding officer of the settlement group that landed in Princess Royal Harbour on 26 December 1826, and formally proclaimed sovereignty on 21 January 1827 for King George IV of Great Britain, naming the place King George's Sound settlement (later renamed Frederickstown and then renamed again Albany). Together with the Old Gaol, and the buildings of the Amity heritage precinct (Breaksea Museum) and the non-navigable replica of the brig Amity, they were the subject of investigation by the Commonwealth of Australia and UNESCO as a convict colonial settlement (not included in the formal nomination).

Museum of the Goldfields

The Museum of the Goldfields in Kalgoorlie explores the history of the Eastern Goldfields, the city’s mining heritage and the hardships faced by the early mining and pioneer families. 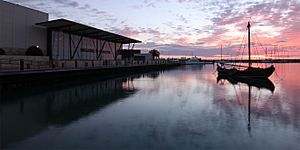 The Museum of Geraldton is situated in Western Australia's rapidly growing mid-west region. This Museum explores the region's biodiversity, mining and agricultural history, the stories of the indigenous Yamaji people and the Dutch shipwrecks. The famous 17th century Dutch vessel,  Batavia, sank in the nearby Abrolhos Islands. This Museum features the portico recovered from this wreck, which has been reconstructed to form the centre of the Museum's shipwreck gallery.

The Western Australian Museum has an extensive research program, with museum scientists and curators specialising in the fields of aquatic zoology, archaeology and anthropology, conservation, earth and planetary sciences, history, and terrestrial zoology. The museum also has a specialist materials conservation team.

The WA Museum Collections and Research Centre (CRC) at 49 Kew Street, Welshpool, houses most of the Museum's collections and research facilities. It houses the following departments (staff and collections):

The Materials Conservation department is responsible for ensuring the millions of items in the museum's collections are permanently preserved for reference, research and exhibition through the use of preventive and remedial conservation techniques in accordance with international and national standards of best practice. The Materials Conservation department also possesses a research division in its overall structure which develop conservation techniques and methodologies.

All content from Kiddle encyclopedia articles (including the article images and facts) can be freely used under Attribution-ShareAlike license, unless stated otherwise. Cite this article:
Western Australian Museum Facts for Kids. Kiddle Encyclopedia.