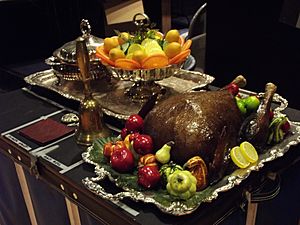 A prop table used in the musical Oliver!

A property, commonly shortened to prop (plural: props), is any object used in performing arts during a performance. They are used on the stage in theatre, and on the screen by actors in movies and television. A prop is anything on a stage or a set that is able to be moved. It is different from the scenery, costumes and production equipment.

Anything that is used but is not part of the scenery (the set) is a prop, e.g., furniture, a book that an actor pretends to read, a pipe that they smoke. Food appearing in the production is also a prop.

Props are looked after by a properties master. Sometimes, for small things like books or fans, it is the actor who is responsible for making sure he has the prop. This is called a "personal prop".

All content from Kiddle encyclopedia articles (including the article images and facts) can be freely used under Attribution-ShareAlike license, unless stated otherwise. Cite this article:
Theatrical property Facts for Kids. Kiddle Encyclopedia.