Her song "I Am Woman" played a significant role in popular culture, becoming an anthem for second-wave feminism. She came to be known as a "feminist poster girl" or a "feminist icon". In 2011, Billboard named her the No. 28 adult contemporary artist of all time (No. 9 woman). In 2013, the Chicago Tribune dubbed her as the "Queen of '70s Pop".

Born in Melbourne, Victoria, to a show-business family, Reddy started her career as an entertainer at age four.

She sang on radio and television, and won a talent contest on a television program, Bandstand, in 1966; her prize was a ticket to New York City and a record audition, which turned out to be unsuccessful. 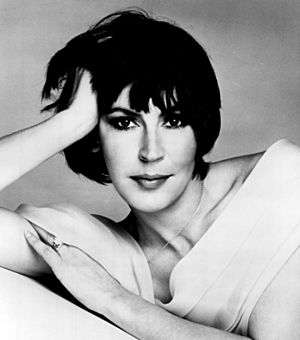 She pursued her international singing career by moving to Chicago and, subsequently, Los Angeles, where she made her debut singles "One Way Ticket" and "I Believe in Music" in 1968 and 1970, respectively. The B-side of the latter single, "I Don't Know How to Love Him" reached No. 8 in Canadian pop chart RPM and she was signed to Capitol Records a year later.

During the 1970s, she enjoyed international success, especially in the United States where she placed 15 singles on the top 40 of the Billboard Hot 100. Six made the Top 10 and three reached No. 1, including her signature hit "I Am Woman".

She placed 25 songs on the Billboard Adult Contemporary chart; 15 made the Top 10 and eight reached No. 1, six consecutively.

In 1974, at the inaugural American Music Awards, she won the award for Favorite Pop/Rock Female Artist.

On television, she was the first Australian to host a one-hour weekly primetime variety show on an American network, along with specials that were seen in more than 40 countries.

Between the 1980s and 1990s, as her single "I Can't Say Goodbye to You" became her last to chart in the US, she acted in musicals and recorded albums such as Center Stage before retiring from live performance in 2002.

She returned to university in Australia and earned her degree, and practised as a clinical hypnotherapist and motivational speaker. In 2011, after singing "Breezin' Along with the Breeze" with her half-sister, Toni Lamond, for Lamond's birthday, Reddy decided to return to live performing.

Reddy was active in community affairs: 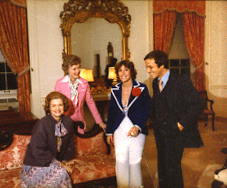 Reddy and Wald with Betty Ford in 1976

At age 20, Helen married Kenneth Claude Weate. The couple separated not long after the birth of their daughter, Traci.

In 1968, she married Jeff Wald, a native of The Bronx. She converted to Judaism before marrying Wald, with whom she had a son, Jordan, born in 1972.

Reddy and Wald had divorced in January 1983.

Reddy died on 29 September 2020 in Los Angeles, aged 78. She suffered from Addison’s disease and dementia in her later years.

A biographical film about Reddy titled I Am Woman was released in 2019, in which Reddy is played by Tilda Cobham-Hervey.

All content from Kiddle encyclopedia articles (including the article images and facts) can be freely used under Attribution-ShareAlike license, unless stated otherwise. Cite this article:
Helen Reddy Facts for Kids. Kiddle Encyclopedia.