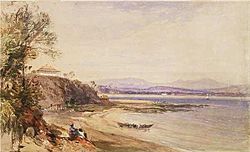 Broulee in 1843; painted by John Skinner Prout in watercolour and gouache 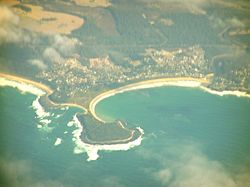 Broulee is a town on the south coast of New South Wales between Batemans Bay and Moruya. At the 2016 census, the town had a population of 1,717. Just off the beach is Broulee Island, currently joined to the mainland, but in past years the connecting spit has been covered by water, at times a very deep navigable channel with a strong current.

The first harbour in the area south of Batemans Bay was established at Broulee behind what is now known as the island. Although settlement had already commenced on the shores of the nearby Moruya River, it was not easily navigable due to a sandbar at its mouth.

The Broulee area was surveyed and gazetted in 1837 and land sales commenced in 1840. At that time a post office was opened with mail being delivered each week over the mountains from Braidwood. Henry Clarke took up farming in the Broulee area in the 1840s after emigrating from Ireland. The first court in the district was established also in 1840 and in 1841 Broulee was made the centre of a police district which covered the area from Jervis Bay to Eden, New South Wales.

In 1841 a flood washed away the sandbar at the mouth of the Moruya River. Land up the river was for sale from 1848 and the Moruya town site surveyed in 1850 and the town gazetted in 1851. That year gold was discovered at Araluen inland from Moruya and near Braidwood. The road from Moruya to Araluen became the preferred route and the functions that had been at Broulee shifted to the growing town of Moruya.

Broulee harbour was lost in 1873 as removal of vegetation for an access road on the land spit eroded the spit and isolated what is now known as Broulee Island. In the last decades of the twentieth century, the spit or tombolo has reformed.

There is a lighthouse on Burrewarra Point to the north of Broulee.

Businesses in the town include a pharmacy / doctor / general store / post office / liquor outlet / fuel. There is a take-away food outlet and a real estate agency. The southern beach has a Surf Lifesaving Club with facilities including toilets, accessed from a road below the headland. There is also a boat launching ramp here, but weather conditions need to be right. There is no police station, the closest being Moruya. The Rural Fire Service has a volunteer station. There are a number of schools in the area.

From 1972 the island has been managed as the Broulee Island Nature Reserve. There is a modern caravan park with on-site vans and cabins available. Another camping area (basic) is located at the southern end of the South Beach, adjacent to Moruya Airport and Moruya River (boat ramp). There are other accommodation options including a motel, bed and breakfast establishments, and holiday cottages for rent.

Activities in the area include surfing, swimming, wind surfing, fishing (beach, rock, estury, ocean) walks, bicycling. Vehicle touring to nearby scenic beaches and headlands is popular. There are 4WD opportunities in nearby State Forests and National Parks. In recent years, the numbers of visiting whales especially the southern right whale (may rest and stay in the area, sometimes entering into Moruya River) and humpback whale show increase in adjacent waters. bottlenose dolphins, Australian sea lions, and sea turtles can be observed from shores as well.

Mogo is a nearby village with artists, crafts and food, as well as historic Mogo Goldfields and the Mogo Zoo. Broulee is a popular weekend destination for residents of Canberra and the Australian Capital Territory.

All content from Kiddle encyclopedia articles (including the article images and facts) can be freely used under Attribution-ShareAlike license, unless stated otherwise. Cite this article:
Broulee, New South Wales Facts for Kids. Kiddle Encyclopedia.