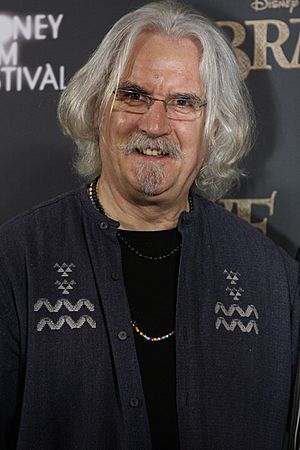 Sir William "Billy" Connolly CBE (born 24 November 1942) is a Scottish comedian, actor, voice artist and musician from Glasgow. Sometimes, he is known as The Big Yin (The Big One in Scottish).

Connolly was born at home in Anderston, Glasgow. He grew up in a tenement in the same inner-city area. Connolly has five children. He is married to Pamela Stephenson, the mother of his three youngest children.

In 2013, he was diagnosed with Parkinson's disease and had surgery for prostate cancer. In January 2019, Connolly said he was "nearing the end of his life" as his Parkinson's advanced.

Connolly has been repeatedly voted Britain's best comedian by television viewers. He is also a folk musician and television presenter.

Connolly was nominated for a BAFTA award for his role in the movie Mrs. Brown. He was given a CBE in 2003.

All content from Kiddle encyclopedia articles (including the article images and facts) can be freely used under Attribution-ShareAlike license, unless stated otherwise. Cite this article:
Billy Connolly Facts for Kids. Kiddle Encyclopedia.