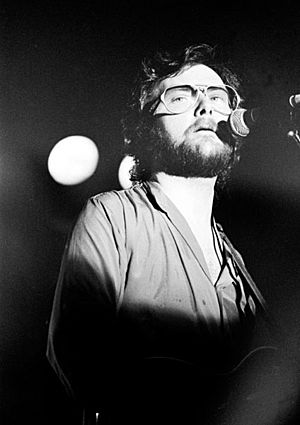 Gerry Rafferty (16 April 1947 – 4 January 2011) was a Scottish singer-songwriter. His 1978 album, City to City, reached number one on the music charts in the USA. "Baker Street", a song from the album reached the Top 10 in both the USA and Britain. It featured a distinctive saxophone solo played by Raphael Ravenscroft.

Rafferty was born in Paisley, Scotland and began playing in bands as a teenager. "Stuck in the Middle" was written in the early 1970's with his band "Stealers Wheel". It was a parody of Bob Dylan's style. It became a hit again after being used in the movie Reservoir Dogs directed by Quentin Tarantino in 1992. Rafferty also played in a folk group, the Humblebums, with Scottish comedian Billy Connolly.

He sold more than 10 million albums but did not enjoy working in the music industry which he said he "loathed and detested." He died in Stroud, Gloucestershire, England, from liver failure caused by his alcoholism.

All content from Kiddle encyclopedia articles (including the article images and facts) can be freely used under Attribution-ShareAlike license, unless stated otherwise. Cite this article:
Gerry Rafferty Facts for Kids. Kiddle Encyclopedia.