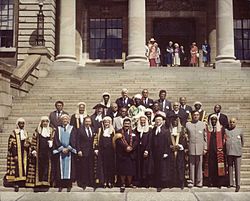 Speaker is the title of the person in charge of some legislatures, usually the lower house.

House of Commons of the United Kingdom

The Speaker is elected by other members of the House of Commons of the United Kingdom, and is usually a member of the government party, but leaves his or her party because the Speaker must be neutral (not like one side more than another). The Speaker does not vote. If the Speaker wants to stand in for re-election the other parties do not oppose him to show he is neutral.

The Speaker (Ceann Comhairle) of the Dáil Éireann is neutral, but the constitution (Bunreacht) of Ireland says he does not need to stand for re-election, he is given the first seat in his constituency.

The Speaker is the leader of the largest party. He or she is not neutral, but votes for his party's policies. The Speaker also helps to get his party's ideas made law. The term of the Speaker of the House is two years in office.

All content from Kiddle encyclopedia articles (including the article images and facts) can be freely used under Attribution-ShareAlike license, unless stated otherwise. Cite this article:
Speaker (politics) Facts for Kids. Kiddle Encyclopedia.