Tree of Knowledge facts for kids 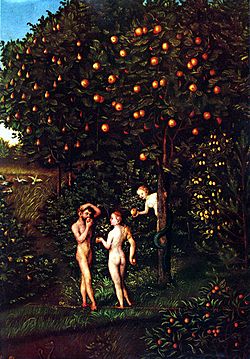 "Tree of Knowledge A painting" by Lucas Cranach the Elder

In the Book of Genesis, chapters two and three, the Tree of Knowledge of Good and Evil was a tree in the middle of the Garden of Eden, along with the Tree of Life. God Told Adam and Eve) to never eat from this Tree. When Eve and Adam, ate the fruit from the Tree of Knowledge, they discovered that they were naked, and were banished from the garden and forced to survive through farming.

Different views of the tree itself

According to the Jewish tradition, God telling Adam and Eve not to eat from the Tree was to give them free choice and allow them to earn perfection instead of getting it with a simple deed. According to this tradition, Adam and Eve would have become perfect and immortal had they not eaten from the Tree. After failing, they were sentenced to a long time of hard work to get themselves back into God's trust.

In Christianity, the Tree of Knowledge is connected to the beginning of sin. By eating the fruit of the Tree, Adam and Eve tried to become like God.

Trees in other religions

In Buddhism, the Buddha became enlightened under a Bodhi tree. While the biblical tree is usually seen as representing pleasure, the Bodhi tree gave pure knowledge.

The symbol of the Tree

Symbolically, the fruit of the Tree of Knowledge tries to divide human action into Right or Wrong, Good or Evil and Lawful or Unlawful with privileges and punishments for each case.

All content from Kiddle encyclopedia articles (including the article images and facts) can be freely used under Attribution-ShareAlike license, unless stated otherwise. Cite this article:
Tree of Knowledge Facts for Kids. Kiddle Encyclopedia.