Clermont is a rural town and locality in the Isaac Region, Queensland, Australia. In the 2016 census the locality of Clermont had a population of 3,031 people.

Clermont is a major hub for the large coal mines in the region as well as serving agricultural properties. 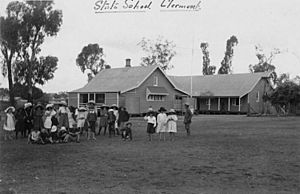 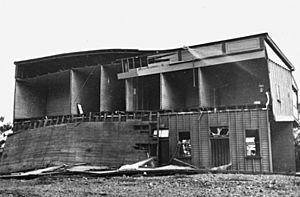 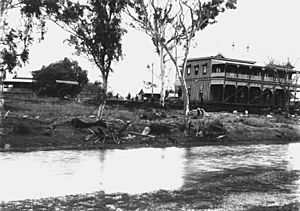 Leo Hotel moving along Lime Street after the flood, 1917

Ludwig Leichhardt was the first European to pass through the Clermont area in 1845, but it was the discovery of gold in 1861 that was responsible for the establishment of the town. The town reserve was proclaimed on 25 March 1864, although a gold field was declared in the area in 1862. Clermont is named after Clermont-Ferrand in France; Clermont-Ferrand was the ancestral home of Oscar de Satge, one of the ﬁrst European grazier who owned the Wolfang Downs pastoral run.

Copper was discovered soon after. In the 1880s up to 4000 Chinese people were resident in Clermont, mining for gold and copper. This led to racial riots and the Chinese were removed from the region in 1888.

The railway was extended north from Emerald to Clermont in February 1884. However, no passenger trains are available to or from Clermont.

The town was originally established on low-lying ground next to a lagoon or billabong, but flooding was always a problem, with four substantial floods occurring between 1864 and 1896. The greatest flood, in 1916, killed 65 people out of a town population of 1,500 and remains one of Australia's worst natural disasters in terms of life lost. Following the 1916 flood, many of the wooden buildings of the town were moved using steam traction engines to a new townsite on higher ground. A local amateur photographer, George Pullar took numerous photographs of the moving buildings, published in the 1980s as "A Shifting Town".

Clermont has a number of heritage-listed sites, including:

Glencore is currently operating the Clermont Mine, located 12 kilometres (7.5 mi) north west of the township of Clermont in central Queensland. When the mine reaches full capacity it will produce up to 12.2 million tonnes of thermal coal for international markets. Clermont Mine delivered its first conveyor of coal in April 2010.

Clermont also hosted another larger coal mine; Blair Athol coal mine, located 20 kilometres (12 mi) north west of Clermont. The mine supplied customers in Asia and Europe with up to 12 million tonnes of thermal coal per annum. The coal deposit was originally discovered on the site in 1864 and was first mined in 1890. Between 1920 and 1945 coal was mined with an underground method, which is still visible today. The most recent open cut operation started in 1984. Blair Athol Mine was closed on 26 November 2012 after it completely mined out. Its stockpile and train facilities will be used by the Clermont Mine, which began operations in 2010. The site is expected to take up to five years to rehabilitate.

All content from Kiddle encyclopedia articles (including the article images and facts) can be freely used under Attribution-ShareAlike license, unless stated otherwise. Cite this article:
Clermont, Queensland Facts for Kids. Kiddle Encyclopedia.