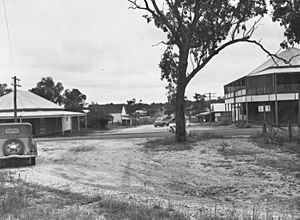 Blair Athol is a former town within Clermont in the Isaac Region, Queensland, Australia. It was obliterated by the development of the Blair Athol coal mine.

Early settler James MacLaren took up a pastoral run in the area in 1863 and named it Blair Athol after the village Blair Atholl, the location of Blair Castle of the Duke of Atholl in Scotland. While sinking a well in 1864, he discovered coal on the property.

By 1873, early shafts were dug, revealing extensive seams of coal. At that time, around 100 people were living in the town and there was a hotel, although no township had been officially surveyed. The town was surveyed in 1878.

By the 1970s, it became apparent that there were significant coal seams under the town. In order to construct an open cut mine, the town had to be sacrificed.

In 1981 a reunion was held at the community hall to mark the final end of the town, following which all of the town was demolished. Only the cemetery remains.

All content from Kiddle encyclopedia articles (including the article images and facts) can be freely used under Attribution-ShareAlike license, unless stated otherwise. Cite this article:
Blair Athol, Queensland Facts for Kids. Kiddle Encyclopedia.