Ayr is a town and locality in the Shire of Burdekin, Queensland, Australia.

Alva beach, a popular area for fishing and swimming, is located 16 kilometres (9.9 mi) east of Ayr.

Ayr has a population of approximately 8,000.

Ayr is believed to be named after the Scottish town of Ayr, the birthplace of Queensland Premier Sir Thomas McIlwraith. 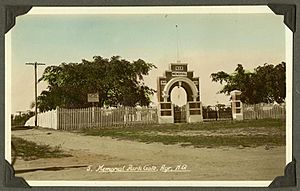 The Ayr War Memorial Arch is the entrance to the Memorial Park and commemorates those who served in World War I. It was dedicated in November 1925 by the shire chairman, Councillor Barsby.

Ayr has a number of heritage-listed sites, including:

The A1 passes through the town. This, mostly two laned highway, is the major road of the Burdekin. It links Ayr with neighboring Brandon and Home Hill. Ayr's main street, Queen street, is a wide two laned street capable of handling a large amount of slow travelling cars.

While the town has no public transport, several bus routes pick up school children across the region.

Ayr has the usual chain stores, including Domino's Pizza, ten pin bowling, a toyshop, cinema, six pubs, and a range of sports, electrical and fashion stores. Ayr has several banks including the Commonwealth, ANZ, Suncorp, National and Bendigo Bank.

All content from Kiddle encyclopedia articles (including the article images and facts) can be freely used under Attribution-ShareAlike license, unless stated otherwise. Cite this article:
Ayr, Queensland Facts for Kids. Kiddle Encyclopedia.