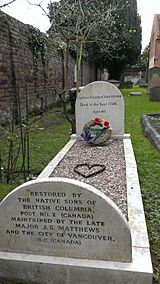 Grave of the explorer George Vancouver 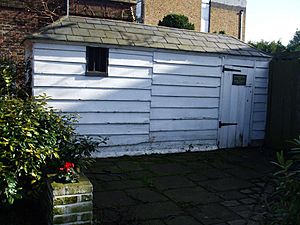 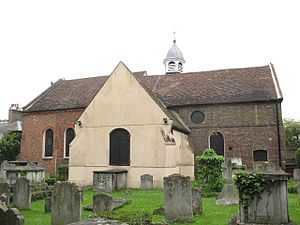 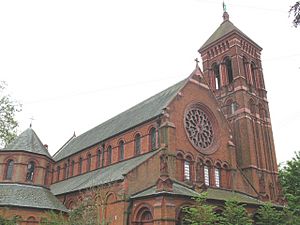 The former All Saints' Church, now a private house 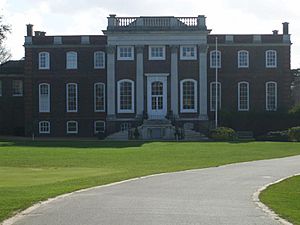 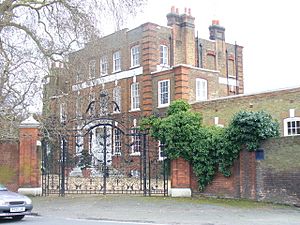 Montrose House was for many years the home of Tommy Steele 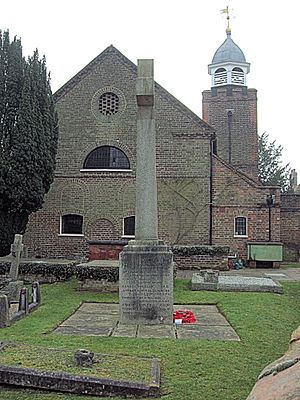 Petersham war memorial, in the churchyard of St Peter's

Petersham is a village in the London Borough of Richmond upon Thames on the east of the bend in the River Thames south of Richmond, which it shares with neighbouring Ham. It provides the foreground of the scenic view from Richmond Hill across Petersham Meadows, with Ham House further along the river. Other nearby places include Twickenham, Isleworth, Teddington, Mortlake and Roehampton.

The village was the birthplace in 1682 of Archibald Campbell, later 3rd Duke of Argyll and Earl of Islay. He went on to found the Royal Bank of Scotland in Edinburgh in 1727, and his face is on the obverse of all of the Royal Bank's current banknotes.

The explorer George Vancouver retired to Petersham, where he wrote the A Voyage Of Discovery To The North Pacific Ocean, And Round The World whilst living in what is now called "Glen Cottage" in River Lane. He died in 1798 and is buried in the churchyard of Petersham Parish Church. His grave in Portland stone, renovated in the 1960s, is now Grade II listed in view of its historical associations.

In 1847 Queen Victoria granted Pembroke Lodge in the Petersham part of Richmond Park to John Russell, 1st Earl Russell and it became their family home. Lord Russell's grandson, Bertrand Russell, spent some of his childhood there also. During World War II the GHQ Liaison Regiment (also known as Phantom) established its regimental headquarters nearby at The Richmond Hill Hotel, with its base (including the officers' mess and billet) at Pembroke Lodge.

In the early 19th century, Charles Stanhope, 4th Earl of Harrington, styled Lord Petersham, gave the name to a type of greatcoat. In 1955 Petersham also gave its name to HMS Petersham which was a Ham class minesweeper.

The former All Saints' Church

Listed buildings include a watchman's box that also served as a village lock-up and dates from 1787.

Petersham Road (part of the A307) includes an extremely sharp right-angled bend edged by a pair of handsome wrought-iron gates. This is the entrance to Montrose House, one of the most notable houses in Petersham. After a spate of serious accidents on the bend in the road, the neighbours formed a group in the 1850s called Trustees of the Road. The Hon. Algernon Tollemache of Ham House was their leader and they managed to persuade the owner of Montrose House to part with some land to reduce the sharpness of the bend. But various dents in the brick wall today reveal that motorists are still taken unawares by it.

Adjacent to Montrose House and equally as impressive is Rutland Lodge, built in 1666 for a Lord Mayor of London.

Another interesting house in Petersham is Douglas House, just off the west drive to Ham House. One of its more notable inhabitants was Catherine, Duchess of Queensberry. In 1969 it was bought by the Federal Republic of Germany for use as a German school. New buildings have been erected in the grounds, but the original house and stables have been preserved.

Petersham is served by only two bus routes: the 65 and 371, both linking the village with Richmond and Kingston upon Thames.

Petersham Parish Church is believed to pre-date the Norman conquest of England as a church at Petersham is mentioned in Domesday Book.

All Saints' on Bute Avenue was built as a church but was never consecrated. It was built between 1899 and 1909 by Leeds architect John Kelly for Mrs Rachael Warde (née Walker) (1841–1906) as a memorial to her parents who had lived at Petersham House. It has been used as a recording studio and as a filming location. During World War II it was used as an Anti-Aircraft Command post. It is now a private residence.

Richmond Golf Club, a private golf club, is situated in the historic Sudbrook Park, adjacent to Richmond Park. The Grade I listed building Sudbrook House, in the park, has been its clubhouse since 1898.

Ham and Petersham Cricket Club, whose home matches are played in Ham, was established in 1815.

Ranelagh Harriers running club is based behind The Dysart restaurant.

Main page: List of people from the London Borough of Richmond upon Thames

All content from Kiddle encyclopedia articles (including the article images and facts) can be freely used under Attribution-ShareAlike license, unless stated otherwise. Cite this article:
Petersham, London Facts for Kids. Kiddle Encyclopedia.