All Saints' Church, Petersham, in Bute Avenue, Petersham, in the London Borough of Richmond upon Thames, is a Grade II listed former church which is now used as a private residence. 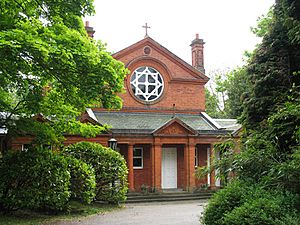 Designed by Leeds architect John Kelly, the church was commissioned in 1899 by Rachel Laetitia Warde (née Walker) (1841–1906) to accommodate the expected suburban expansion of Petersham and as a memorial to her parents, using funds from the estate of her father Samuel Walker (1812–1898) who had died the previous year. However, she died three years before it was finished and the project was completed by her son Lionel (1876–1963). The foundation stone was laid in November 1901 and the church dedicated by the Bishop of Kingston, Cecil Hook, in April 1909.

The church, with a separate church hall and institute (which is also Grade II listed) was erected in the grounds of Bute House (previously the residence of British Prime Minister John Stuart, 3rd Earl of Bute, and which was demolished in 1908). It was built in red brick and terracotta in the style of a basilica. The campanile (bell tower) is 118 feet high, with a pyramidal roof crowned by a figure of Christ overlooking Richmond Park. Bridget Cherry and Nikolaus Pevsner described the architectural style as "[e]mphatically Italian Early Christian or Romanesque", the interior as "lavish" and the baptistery as "quite exceptional". The nave had a grey and white marble central aisle taken from Tournai Cathedral in Belgium. To the north was an octagonal baptistery including a tank for total immersion. The altar, which was raised to a considerable height above the floor of the nave, had a tall reredos and rood.

The church was never consecrated as the anticipated growth in Petersham's population did not take place. However, it was used occasionally by the parish and also by the Greek Orthodox Church. It continued to be used for weddings until 1981 but ceased to be used as a church in 1986.

During the Second World War it was requisitioned and used as a radar and anti-aircraft command post. It was also used as a recording studio and as a location for filming. In January 1976 Luciano Pavarotti recorded his best-selling O Holy Night album (reissued as a CD in 1990) in the church. Other recordings made at the church include an album of songs by Alexander Borodin and Alexander Dargomizhsky, performed by Sergei Leiferkus, Semion Skigin and Leonid Gorokhov, and recordings by John McCabe and by Christopher Hogwood and the Academy of Ancient Music. Other artists who have recorded there include Vladimir Ashkenazy, Dimitri Ashkenazy, and Vovka Ashkenazy.

The Anglican Diocese of Southwark sold the church building in about 1996. It is now a private residence, known as All Saints House, and has been converted to include an indoor swimming pool, jacuzzi and steam room.

The church hall is now used as Petersham's village hall. The frieze above the hall's front entrance has the inscription "AD 1900. Ellen Walker Thy Kingdom Come. Memorial Church Room".

All content from Kiddle encyclopedia articles (including the article images and facts) can be freely used under Attribution-ShareAlike license, unless stated otherwise. Cite this article:
All Saints' Church, Petersham, London Facts for Kids. Kiddle Encyclopedia.