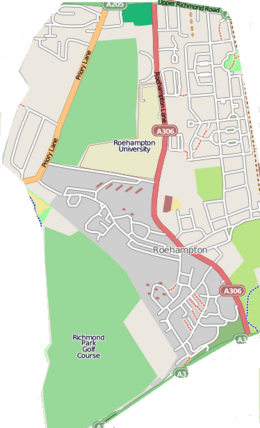 Map of Roehampton, excluding Roehampton/Putney Vale to the south

Roehampton is a suburban district in southwest London, in the Putney SW15 postal district, and takes up a far western strip running north to south of the London Borough of Wandsworth. It contains a number of large council house estates and is home to the University of Roehampton.

The Roe in Roehampton is thought to refer to the large number of rooks that still inhabit the area.

Roehampton emerged as a favoured residential suburb of the 18th and 19th centuries following the opening of Putney Bridge in 1729 and the development of a number of large private estates from which several of the original houses survive. Roehampton House (grade I) by Thomas Archer was built between 1710–12 and enlarged by Sir Edwin Lutyens in 1910. Parkstead House (grade I) built in 1750 for William Ponsonby, 2nd Earl of Bessborough, now forms part of the University of Roehampton. Mount Clare (grade I) built in 1772 for George Clive, cousin of Lord Clive, which forms part of the University of Roehampton, along with Grove House (grade II*), built originally for Sir Joshua Vanneck in 1777 (also now owned by the university). Capability Brown is reputed to have laid out the grounds. The university also owns Downshire House (grade II*); built in 1770 and once occupied by the Marquess of Downshire. The Society of Jesus founded St Joseph Church in Roehampton in 1869 from the novitiate that became Whitelands College. Roehampton Village has retained something of its rustic Georgian charm, best exemplified by the King's Head Inn, at the foot of Roehampton High Street and the Montague Arms, Medfield Street, both 17th century in origin. Dramatic change came to Roehampton when the London County Council (LCC) built the Roehampton Estate in the 1920s and 1930s (renamed the Dover House Estate) and the Alton Estate in the 1950s.

Dover House Road Estate is one of a number of important London County Council cottage estates inspired by the Garden City Movement. The land was previously the estates of two large houses, Dover House and Putney Park House, which were purchased by the LCC soon after World War I. Dover House was demolished for the new estate, but Putney Park House remains. The common characteristic of the LCC cottage estates is picturesque housing influenced by the Arts and Crafts style. It was the intention at Dover House Estate to create housing in groups that overlooked or had access to open space, to provide a sense of intimacy and individuality, and the estate was laid out with communal green spaces. Allotments were also provided in three backland areas behind houses, two of which remain, the third subsequently infilled by housing. 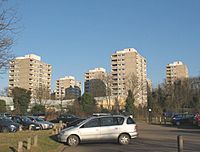 The notable Alton Estate, one of the largest council estates in the UK, occupies an extensive swathe of land west of Roehampton village and runs between the Roehampton Lane through-road and Richmond Park Golf Courses, as can be seen on the map above. The estate is renowned for its mix of low and high-rise modernist architecture consisting of Alton East (1958) styled a subtle Scandinavian-influenced vernacular and its slightly later counterpart: Alton West (1959). At Highcliffe Drive on Alton West the LCC essentially retained the Georgian landscape and placed within it five ultra modern slab blocks: Binley, Winchfield, Dunbridge, Charcot and Denmead Houses, (all grade II*) inspired by Le Corbusier's Unite d'Habitation. The installation and construction of a pedestrian entrance to Richmond Park from the Alton Estate was secured by Justine Greening (MP for the Putney constituency, which includes Roehampton) in 2007 although it has not yet materialised.

The Alton Estate has featured as a film and television location. Fahrenheit 451 (1966) used some of the estate as its backdrop for a bleak dystopian society of the future and Thames Television's film division Euston Films used the Danebury Avenue area of the estate to film the opening scenes of Sweeney 2 (1978), the sequel to the film Sweeney!(1977).

The estate is now part of a regeneration scheme with a number of government initiatives such as SureStart helping to tackle issues of poverty and social exclusion.

Roehampton was originally a village which evolved as a popular residential area for the wealthy within easy reach of London. Roehampton House was built in 1710 and was until 2008 the administrative centre for Queen Mary's Hospital. It is now being developed into private flats. Parkstead House was built in 1763 by the second Earl of Bessborough, and was the home of the socialite Caroline Lamb before being acquired in 1861 for use as a seminary by the Jesuits and renamed Manresa House. Gerard Manley Hopkins, the Jesuit poet, lived there. Many other 18th century aristocratic summer villas were set in parkland near Richmond Park and Putney Heath. Parkstead (Manresa) House, Downshire House, Grove House and Mount Clare are now all part of the University of Roehampton campus. Much of the old village of Roehampton still remains dominated by large detached houses. An old watering trough for Victorian carriage-horses exists at the junction of Medfield Street and Roehampton Lane. The university has campaigned to have nearby Barnes railway station renamed as Barnes & Roehampton given that the station is situated between the two areas.

Roehampton is home to a number of well-known educational institutions: the University of Roehampton has approximately 10,500 students housed in 4 colleges and around 4,000 students studying online; the new Queen Mary's Hospital with its renowned amputee rehabilitation centre opened in 2006 is a teaching centre for medical students based in Wandsworth NHS Primary Care Trust; Kingston University has one of its campuses in Roehampton Vale; South Thames College also has a Campus on Roehampton Lane. It has long been a major centre for teacher-training, being the site of two constituent colleges (Digby Stuart College and Froebel College) of the former federal Roehampton Institute of Higher Education (now the University of Roehampton), as well as South East England's only lecturer-training college (Garnett College) which eventually moved and became part of the University of Greenwich.

Apart from education other notable institutions based here include: The Priory Clinic; the Bank of England Sports Centre; Rosslyn Park Rugby Football Club; and the Roehampton Club. The International Tennis Federation moved to Roehampton from Baron's Court in 1998, and in 2007 the Lawn Tennis Association made the same short journey across London to their newly built headquarters next door to the ITF. Roehampton has long been an exclusive London address.

In October 2009 a planning application was submitted to restore the King's Head and convert the existing buildings with extensions into a 51 bedroom hotel, as part of the regeneration of Roehampton town centre. The application was due to be considered in February 2010.

Furthermore, Roehampton is an important location within H.G. Wells' novel The Sleeper Awakes. Roehampton (along with 5 other locations in London; namely Wimbledon Park, Norwood, Blackheath and Shooter's Hill) form a series of rudimentary airports known as 'Flying Stages'. The Flying Stage at Roehampton is the scene for a major battle within the plot.

In the 2011 census, the Wandsworth ward of Roehampton and Putney Heath did not record a single majority ethnic group. The largest ethnicity in the ward was White British at 45%, followed by Other White (18.4%), Black African (7.9%), and Other Asian (4.6%).

Barnes and Putney are the nearest railway stations. Roehampton University has campaigned to have nearby Barnes station renamed Barnes & Roehampton, as the station is situated between the two areas.

All content from Kiddle encyclopedia articles (including the article images and facts) can be freely used under Attribution-ShareAlike license, unless stated otherwise. Cite this article:
Roehampton Facts for Kids. Kiddle Encyclopedia.