Kingston Vale with Kingston Hill is a district in the Royal Borough of Kingston upon Thames in south-west London. It is a residential area between Richmond Park, the much smaller Putney Vale, Wimbledon Common, Coombe/Coombe Hill and the Norbiton part of the very old borough. The main road is the A308 (also called Kingston Vale and Kingston Hill) which is a through route for traffic passing to and from Kingston Hill to the A3 trunk road (locally known as the Kingston By-pass). Many of the branch roads are cul-de-sacs. It includes, toward the east and in the Vale, the only part of Kingston which drains eastward, that is, into Beverley Brook. The hill expanse, shared with Coombe and a golf course, has a hotel, some tall blocks overlooking Kingston, the edge of Kingston Hospital, the main campus of Kingston University London and faint remnants of dense woodland.

The area was known as Kingston Bottom up until the middle of the 19th Century; the name is featured in a variety of documents dating from 1791 to c. 1850. The Last Will and Testament of one Philip Cawston, dated 26 September 1791, refers to his ownership of the Robin Hood premises in Kingston Bottom at that time; the name also features in maps and wills held by the National Archives dating from 1791 to 1856 inclusive. 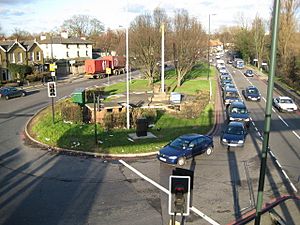 Kingston Vale is located north-east of Kingston on the A308; the village straddles both the A308 and the A3 London–Portsmouth Road. The closest junction of the A3 is the Robin Hood Roundabout, which is located at the north-eastern end of the village.

Kingston Vale is served by three local bus routes, connecting the village with New Malden and Tolworth to the south, Kingston and Surbiton to the south-west and Roehampton and Putney to the north-east. The bus routes serving Kingston Vale are as follows:

Kingston Vale is not directly accessible by rail; the nearest stations are Norbiton to the south-west, and Putney and Barnes to the north-east. Bus connections are also available within a short walk of the stations at Kingston, New Malden, Surbiton, Tolworth and Barnes.

The nearest Tube station is East Putney station on the District line to the east, with direct bus connections to Kingston Vale on routes 85 and 265. An indirect connection with South Wimbledon station on the Northern line is also possible, via New Malden, Kingston or Roehampton.

The first church in the area was built in 1839 and became the centre of its own Parish in 1847. The present village church, the Parish Church of St. John the Baptist on Robin Hood Lane, was consecrated on 22 July 1861 and after various additions, was completed in 1886 by the addition of the Choir Vestry. It is an Anglican church within the Deanery of Kingston and the Archdiocese of Southwark. In addition to its religious functions, the church acts as a focal point for community activities in Kingston Vale, which are held within the Village Hall and the two Parish Halls. These include social clubs, dancing and table tennis, as well as providing facilities for local associations and for two local nursery schools. Every year the Church holds a summer fete and a fireworks night event, which both attract local residents and their friends and are a good opportunity for them to interact with their neighbours. The Parish Office manages the booking of four halls (three on the site at St. John's and the Village Hall), which are used for parties and social events.

There are no known facilities for other faiths within the village of Kingston Vale. A guide to the places of worship in the Royal Borough of Kingston-upon-Thames can be found via the Kingston Inter-Faith Forum.

Kingston Vale is surrounded by open spaces and this is reflected in the range of local activities; the village is home to Stag Lodge Stables, adjacent to the Robin Hood Gate of Richmond Park, offering horse-riding in and around Richmond Park and Wimbledon Common. The Richardson Evans Memorial Playing Fields, adjacent to Wimbledon Common, play host to a variety of sporting activities including football, rugby football, cricket, Australian rules football and frisbee, with the site being used to host the UK Ultimate Frisbee Championships in 2007 and the European Ultimate Frisbee Championships in 2008. The site is also home to the annual National Schools Rugby Sevens Tournament.

It has an active local amenity group - the Kingston Vale Residents Association (KVRA). This is a democratic body which deals with matters such as planning, conservation, transport, environment and social.

There area's newsletter called the "Bottom Line" taking its name from the original Middle Ages name of the area: Kingston Bottom. The name was changed to Kingston Vale in Victorian times apparently to save some blushes.

Kingston Vale benefits from a variety of halls, notably the Village Hall and two Parish Halls, which are used to host a variety of community activities including an Art Club, the local Operatic and Dramatic Society, a Coffee Club run by the local church, a table tennis club, meetings of the Residents' Association and other community events. The village also has a self-managed allotment site, which caters to some 60 plot holders from around the Borough and organises a range of social events centred on the site.

The village is also home to the Dorich House Museum, a museum of sculpture and Imperial Russian art which is run both as a museum and a conference centre by Kingston University.

The playing fields host the annual Pongu Tamil event for the London area, a community rally attracting some 30,000 members of the British Tamil community.

The vale has its own primary school, the Robin Hood Primary School. The hill hosts Kingston Hill Campus of Kingston University. The Parish Halls play host to a Montessori nursery school and a children's dancing school –the Kingston Vale Dance Academy.

All content from Kiddle encyclopedia articles (including the article images and facts) can be freely used under Attribution-ShareAlike license, unless stated otherwise. Cite this article:
Kingston Vale Facts for Kids. Kiddle Encyclopedia.