Surbiton is a suburban area of south-west London within the Royal Borough of Kingston upon Thames. It is situated next to the River Thames, 11.0 miles south west of central London. Surbiton was formerly within the County of Surrey, but became part of Greater London in 1965 following the London Government Act 1963, together with many areas including neighbouring Kingston and Richmond. Surbiton possesses a mixture of Art-Deco courts, more recent residential blocks and grand 19th century townhouses blending into a sea of semi-detached 20th century housing estates.

See the article on Thomas Pooley for his rôle in the establishment of the present-day town of Surbiton.

See also the article on the Municipal Borough of Surbiton for the period 1855–1965. 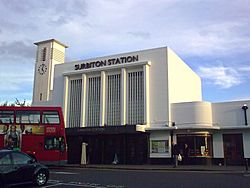 The present-day town came into existence after a plan to build a London-Southampton railway line through nearby Kingston was rejected by Kingston Council, who feared that it would be detrimental to the coaching trade. This resulted in the line being routed further south, through a cutting in the hill south of Surbiton. Surbiton railway station opened in 1838, and was originally named Kingston-upon-Railway. It was only renamed Surbiton to distinguish it from the new Kingston railway station on the Shepperton branch line, which opened on 1 January 1869. The present station has an art deco façade.

As a result, Kingston is now on a branch line, whereas passengers from Surbiton (smaller in comparison) can reach London Waterloo in about 15 minutes on a fast direct service; as well as places further afield, including Portsmouth and Southampton.

It was once home to Surbiton Studios which were owned by Stoll Pictures, before the company shifted its main production to Cricklewood Studios.

The Pre-Raphaelite painters John Everett Millais (1829–1896) and William Holman Hunt (1827–1910) came to Surbiton in 1851, 26 years before Richard Jefferies (1848–1887). Millais used the Hogsmill River, in Six Acre Meadow, Tolworth, as the background for his painting Ophelia. Holman Hunt used the fields just south of this spot as the background to The Hireling Shepherd.

In the mid-1870s the novelist Thomas Hardy (1840–1928) lived in a house called 'St. David's Villa' in Hook Road, Surbiton for a year after his marriage to Emma Gifford. H.G.Wells, in his comic novel The Wheels of Chance, describes the cycle collision of 'Mr Hoopdriver' and a 'Young Lady in Grey'; the young lady approaching 'along an affluent from the villas of Surbiton'. The writer Enid Blyton (1897–1968) was governess to a Surbiton family for four years from 1920, at a house called 'Southernhay', also on the Hook Road. C.H. Middelton (1886–1945), who broadcast on gardening during the Second World War, lived in Surbiton, where he died suddenly outside his home. The artist who brought Rupert the Bear to life for a whole generation Alfred Bestall sketched out his cartoons from his home in Cranes Park, Surbiton Hill.

A 1972 episode of Monty Python's Flying Circus featured a mock documentary which investigated whether the residents of Hounslow, another London area suburb, had long ago been descendants of the people of Surbiton "who had made the great trek north."

Surbiton is popularly remembered as an icon of suburbia in such British television programmes as The Good Life (starring Richard Briers, Penelope Keith, Paul Eddington and Felicity Kendal), though location filming was done in Northwood, North-West London), and John Sessions' comedy series Stella Street, which has on occasion led to the town being nicknamed "Suburbiton". Other names for the town include "the 'Surbs" and "the 'Tron" in reference to '80s movies The 'Burbs and Tron.

Surbiton station features in the 2009 film version of Harry Potter and the Half-Blood Blood Prince, with actors Daniel Radcliffe as Harry Potter and Michael Gambon as Albus Dumbledore. Filming took place in November 2007. The station also appears in Agatha Christie's Poirot: The Adventure of the Clapham Cook, a TV adaptation of the short story by Agatha Christie and the first episode of the 1989 ITV series. Having been set in the 1930s Art Deco period and external shots of Hercule Poirot's fictional residence Whitehaven Mansions being filmed at Florin Court, the station assists in maintaining the authenticity of the programme and was built within a year of Florin Court.

Surbiton receives an offhand mention in the seventh chapter of the James Bond novel On Her Majesty's Secret Service (1963) by Ian Fleming, whilst Sable Basilisk is discussing heraldry with Bond.

The guitarist and singer-songwriter Eric Clapton purchased one of his first guitars from a shop in Surbiton called Bells; the shop has since closed.

In the episode of EastEnders broadcast on 23 November 2012, Ava Hartman, daughter of Cora Cross, refers to her difficulties of being a black woman growing up in Surbiton in the late 1960s and 1970s adopted by white parents. 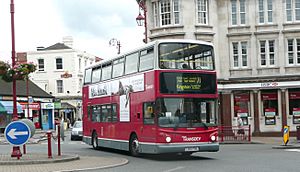 A London bus on route 71 travelling through Surbiton

Until the early 19th century, Surbiton, like Norbiton, lay in the parish of All Saints, Kingston upon Thames. As a result, Surbiton's three parish churches all date back to the Victorian era. The two Anglican ones, Saint Mark's and Saint Andrew's, are located in the town centre. The third is the Roman Catholic church of Saint Raphael's, which is located away from the centre towards the north, in the Kingston upon Thames postal district. 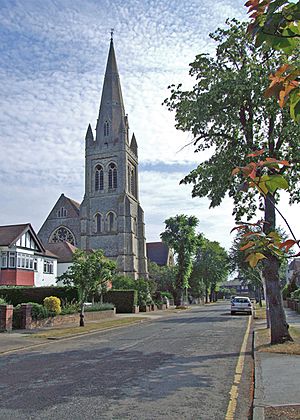 In addition, there are two other Anglican parish churches in south Surbiton, Christ Church and Saint Matthew's. Both are also Victorian.

Saint Matthew's was completed in 1875, having taken less than 2 years to build. The church and the original vicarage were paid for by one man, William Matthew Coulthurst, who was the senior partner of Coutts Bank. On the outside of the east end of the church there is a stone plaque recording this and the fact that it was partly built in memory of Hannah Mabella Coulthurst, the dead sister of William Matthew Coulthurst. Built into the wall behind the plaque there are a photograph of Hannah, a copy of ‘The Times’ newspaper of the day and a letter from William Coulthurst stipulating that the church should be and remain in the evangelical tradition. The church and vicarage cost £26,500. The old vicarage was pulled down in 1939 and a subsequent one built on the same plot. In 2012 work started on a new vicarage on part of the plot and this was completed in 2013.

All content from Kiddle encyclopedia articles (including the article images and facts) can be freely used under Attribution-ShareAlike license, unless stated otherwise. Cite this article:
Surbiton Facts for Kids. Kiddle Encyclopedia.