All Saints Church, Kingston upon Thames facts for kids 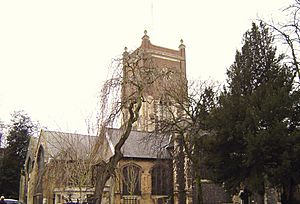 All Saints Church from the North East 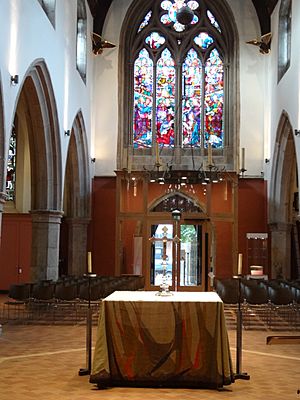 Interior of All Saints

All Saints Church is the historic parish church of Kingston upon Thames on the edge of London, and is set between the ancient Market Place and the main shopping centre. It forms part of the Diocese of Southwark and with the church of St John, and St John the Divine, it forms a team of Anglican churches serving residents, businesses, schools and Kingston University. The church is the only Grade I listed building (but not structure) in Kingston.

A church at Kingston sprang up in Saxon times and Egbert, king of Wessex, held his great council at the site in 838. Seven Saxon kings of England, including Athelstan and Ethelred the Unready, were crowned here in the 10th century. The present church was begun in 1120 under the orders of Henry I and has been developed since then. It is a cruciform church with a central tower and a four-bay nave, with Perpendicular clerestory, choir, north and south aisles, transepts and chapels. The exterior is of flint with stone dressings and a parapet of stone battlements.

Edward the Elder was crowned in Kingston in 900 at the Coronation Stone, as was his son Athelstan in 925. In the following years Kingston was the site of the consecrations of Edmund I in 940, Eadred in 946, Eadwig in 955, Edward the Martyr in 975 and, finally, Ethelred, who was crowned by Bishop Oswald of Worcester in 978.

Outside the south door of the present building are some outlines marked by stones, which are all that remain of the Saxon church and chapel of St Mary. The present church was begun in 1120 under the orders of Henry I and has been developed since then. During the 14th century, the Norman nave was widened. The chancel and the chapels of the Holy Trinity to the north and St James to the south were added during the 15th century. The original high wooden spire on top of the tower was struck by lightning and almost entirely destroyed in 1445 and was rebuilt in 1505. In 1600, the church was described at vestry meeting as being "much out of repair and there being a need for a speedy repair of the same in several places ... to prevent further damages and inconvenience." The tower was taken down to the level of the nave and was strengthened and rebuilt in 1708 in brick, with dipped parapet and pineapple ornaments on the corners. The chapel of St. Mary, which stood at the south-east of the church, next to the south chapel of St. James, was pulled down in 1730 after some of the walls fell, killing the sexton.

The church was much restored in the 19th century, by Brandon from 1862 to 1866 and Pearson in 1883. A 12th-century doorway was discovered in the west wall of the nave in about 1865 but destroyed. Ceilings were reconstructed and the organ gallery at the west end was removed. In the 1890s, remaining galleries were removed and new roofs provided to the nave, aisles and transepts. After the First World War, the choir vestry was built on the north wall and a memorial chapel dedicated to the East Surrey Regiment. The same regiment also has a set of memorial gates at the south entrance to the churchyard, on Market Place (the regiment's badge appears over them). The gates were formally opened on Remembrance Sunday 1924 by the Bishop of Kingston, Percy Herbert. The gates became a separate Grade II listed building in April 2016; the church is Grade I listed.

The church contains a 14th-century wall painting of St. Blaise, a 17th-century marble font attributed to Sir Christopher Wren, twelve bells and an 18th-century carillon, the great west window of the 19th century, and the Frobenius organ installed in 1988. There are several notable monuments in the church. On a slab in the south chapel is a brass figure of a man standing on a mound dressed in a fur-lined tunic with his hands in the position of prayer. In a recess on the south wall of the south chapel is the tomb of Sir Anthony Benn, Recorder of Kingston and afterwards Recorder of London, who died in 1618, containing his recumbent effigy in his lawyer's robe and ruff collar and cuffs. Between the south door and the tower is Sir Francis Chantrey's seated figure commemorating Countess Louisa Theodosia, wife of Prime Minister Lord Liverpool. While Louisa was buried at Hawkesbury, Gloucestershire, Lord Liverpool's second wife, Mary was interred at All Saints after her death in October 1846.

All content from Kiddle encyclopedia articles (including the article images and facts) can be freely used under Attribution-ShareAlike license, unless stated otherwise. Cite this article:
All Saints Church, Kingston upon Thames Facts for Kids. Kiddle Encyclopedia.