Kids Encyclopedia Facts
This page is about the town of Chessington. For the nearby attraction, see Chessington World of Adventures.

Chessington is an area in the Royal Borough of Kingston upon Thames within Greater London. It is the largest salient of Greater London into the neighbouring county of Surrey. As of the 2011 census it had a population of 18,973. The Bonesgate Stream, a tributary of the Hogsmill River runs through it. The popular theme park resort Chessington World of Adventures, which incorporates Chessington Zoo, is located in the south-west of the area.

Chessington appears in the Domesday Book as Cisedune and Cisendone. It was held partly by Robert de Wateville and partly by Milo (Miles) Crispin. Its Domesday assets were: 1½ hides; part of a mill worth 2s, 4 ploughs, woodland worth 30 hogs. It rendered £7.

The mansion at Chessington World of Adventures, known today as the Burnt Stub, was originally built in 1348. In the English Civil War it became a royalist stronghold and was razed to the ground by Oliver Cromwell's Parliamentary forces, giving it its modern name. The site became an inn and was then rebuilt on a grander scale from the 18th century by the Vere Barker family in a Neo-Gothic Victorian style. The grounds were turned into a zoo in 1931 by Reginald Goddard. Chessington Zoo became part of the Tussauds Group in 1978 and is now operated as a theme park. Burnt Stub had no public access until 2003 when it became an attraction called Hocus Pocus Hall. 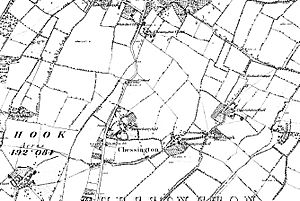 Map of Chessington in the 1880s

Chessington Hall has a place in 18th-century literary history, as home of Samuel Crisp, a failed playwright and close friend of Fanny Burney. Chessington Road Recreation Ground was purchased on 16 October 1930 for £1,000.

At 207 Hook Road is a Blue plaque commemorating the author Enid Blyton who lived at the address between 1920 and 1924.

The former RAF Chessington Hospital, demolished in the 1990s, first opened as RAF Hook around 1938 as a regional barrage balloon depot and was operated by RAF Balloon Command. It became a vital part of Britain's defence against the Luftwaffe in World War II and originally featured a number of large barrage balloon sheds as well as extensive garages and workshops for the station's support vehicles.

Chessington houses one of the Europe's leading theme park resorts Chessington World of Adventures. This includes a zoo, a theme park, an aquarium and two four star hotels - the Safari Hotel and Azteca Hotel. In the grounds of the resort lies the historic Burnt Stub Mansion.

Chessington Garden Centre is located in the south of the area near Malden Rushett. 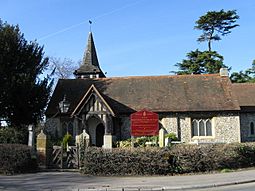 The areas of Chessington have these names:

Chessington World of Adventures (branded, is often referred to simply as "Chessington"), a zoo and theme park with a broader appeal. Within the park there is the Burnt Stub Mansion from the English Civil War. Also one of the main employers in the area.

The town is served by the Surrey Comet newspaper, as well as the free paper Kingston Guardian.

Within the town there are various sporting organisations including: Non League football clubs Chessington & Hook United F.C. and Epsom Athletic F.C., who both play football in the Combined Counties League; and Kingston R.F.C. based on the Hook Road. Kingston RFC play in Surrey division 2 union league.

On site with Chessington Community College is Chessington Sports Centre. The sports centre is home to many local sports clubs such as The Kingston Wildcats (2nd and youth teams), Genesis Gymnastics Club, Chessington Badminton Club and many others. The Sports Centre has a multi use sports hall, a fully equipped fitness suite and Kingston's only Climbing Wall, Chessington Rocks.

The former Formula One racing team Brabham had their factory in Chessington. The site is now occupied by the Carlin DPR GP2 team. 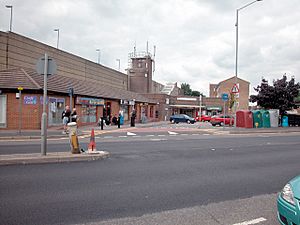 The line past Chessington South has fallen into heavy disrepair and leads over a concrete bridge into a patch of full-grown trees. It is interesting to point out that the crossover, signal, and rail electricity at this point is still active, even though a passenger train has never passed over this section.

Chessington is about four miles (6 km) from junction 9 of the M25 motorway. The town is situated on the A243 Leatherhead Road, close to the A3 London-to-Portsmouth trunk route to the north. The un-numbered Bridge Road runs through the area from the A243 toward the adjacent district of West Ewell, in the neighbouring borough of Epsom and Ewell (the boundary being marked crossing the course of the Bonesgate Stream).

All content from Kiddle encyclopedia articles (including the article images and facts) can be freely used under Attribution-ShareAlike license, unless stated otherwise. Cite this article:
Chessington Facts for Kids. Kiddle Encyclopedia.