Kids Encyclopedia Facts
This page is about the village in Surrey. For the equipment rental company, see Ashtead Group. For the area of Birmingham, see Ashted.

Ashtead is a large village in the Mole Valley district of Surrey, England, approximately 15.5 miles (24.9 km) south of central London. The village is on the northern slopes of the North Downs and is on the single-carriageway A24. Ashtead has a large two-part conservation area, including the mansion Ashtead Park House (now occupied by City of London Freemen's School). Amenities include parks, outlying woodland trails and a high street with convenience shopping, cafés and restaurants, a football club and a cricket club. The Rye, a tributary of the River Mole, runs to the north of the village.

Ashtead railway station is on the Mole Valley line between Epsom and Leatherhead. Train services to London Victoria are run by Southern and to London Waterloo by South Western Railway. The M25 motorway runs to the south of the village and may be accessed via junction 9.

There has been settlement in Ashtead since at least Roman times, with a Roman villa excavated in what is now Ashtead common. Within a few hundred years of the foundations of Anglo-Saxon England, Ashtead lay within the Copthorne hundred.

Ashtead appears in the Domesday Book of 1086 as Stede. It was held by the Canons of Bayeux from the Bishop of Bayeux. Its Domesday Assets were: 3 hides and 1 virgate; 16 ploughs, 4 acres (1.6 ha) of meadow, woodland worth 7 hogs. Its people rendered £12 in total to its feudal system overlords per year. Its main source of water at the time seems to have been the Rye.

St Giles' Church in Ashtead Park dates from the 12th century, and Ashtead is mentioned twice in Samuel Pepys' diaries. Part of his entry for 25 July 1663 reads:

Towards the evening we bade them adieu and took horse, being resolved that, instead of the race which fails us, we would go to Epsom When we come there we could hear of no lodging, the town so full, but which was better, I went towards Ashsted, and there we got a lodging in a little hole we could not stand upright in While supper was getting I walked up and down behind my cosen [cousin] Pepys's house that was, which I find comes little short of what I took it to be when I was a little boy.

Even after the Victorian general harmonisation of spelling, accelerated by the mass distribution of the maps and the printed press, the name of the village had until the early 20th century been more commonly spelt as "Ashsted" and variants. It was recorded in an 1820 map of 24 miles around London "Ashsted"; in one of 1773, of Surrey, "Asted". The suffix '-stead' also written '-sted' is used to form the meaning behind and pronunciation of the place name, as in Sanderstead, Bearsted, Oxted and East Grinstead, and following the spelling of Oxted has settled on minimal instances of 's'; the second s is deemed implicit in place name pronunciation of communities in the region. However, while it may have been implicit in 1967, as with Cheshunt and Wrotham it is an example of a London satellite area with slightly counterintuitive pronunciation. 'Stede' is the earliest spelling, without any first syllable, from the 11th century, see the Domesday Book above. 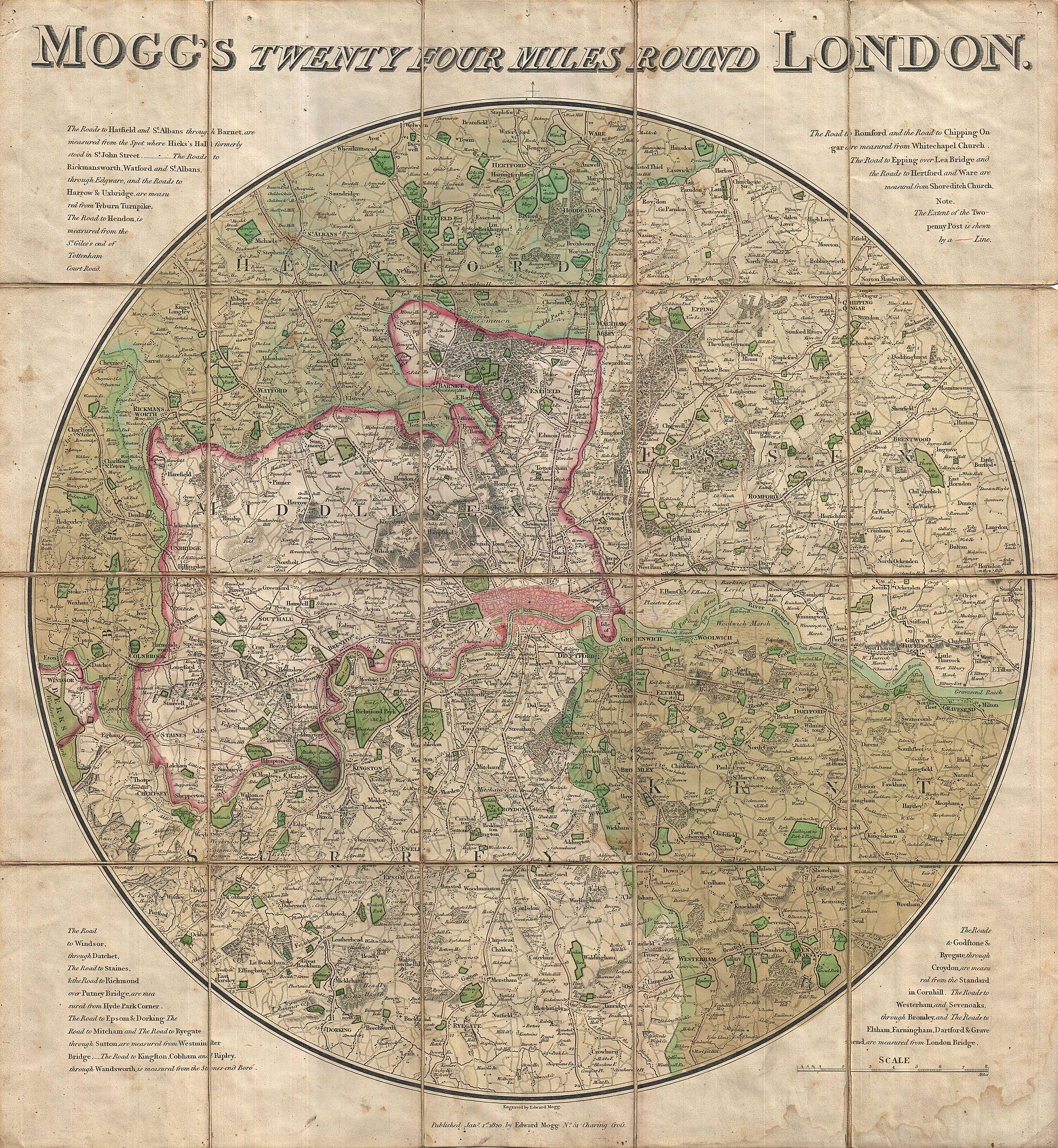 Elevations range from the south west crest of the village at 100m AOD (above mean sea level) to 45m AOD at the Leatherhead border outflow of The Rye that rises at a pond at Little Park Farm, Farm Lane, Ashtead. The Rye forms Ashtead's eastern border then turns west, so forms a half-square around the village. 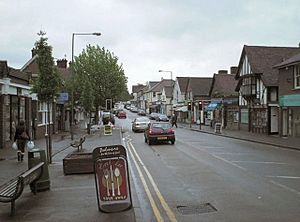 The Street, the main thoroughfare

Marked on Ordnance Survey maps are three of the four named neighbourhoods of Ashtead: Lower Ashtead, rural Ashtead Common and Ashtead Park. At its centre is the most historic part architecturally with many listed buildings, along Rectory Lane and the slightly bendy thoroughfare, The Street.

The fourth area is Ashtead Village which is contiguous with the rest but at its heart. This is the oldest part of Ashtead and has the main shopping and social area of the village, with two pubs and the Ashtead Village Club which is a C&IU affiliate. It has a small southern conservation area, however outside of this has eight listed brick buildings, each more than two centuries old, including the Old Rectory which has been subdivided (built 1777) and so too has Ashtead Lodge (built 1765 – divided into five) Forge Cottage with Wisteria Cottage here are dated to approximately the 17th century and are also Grade II listed.

The area north of the railway line is Ashtead Common, managed by the City of London Corporation subject to a long-standing preservation order, and is a national nature reserve.

Lower Ashtead is a relatively flat area leading to Ashtead Common that has a recreation ground, a youth club and skate park, a pub, and a number of shops all built near the preserved large square of wood in front of the railway station.

The village lies within the parliamentary constituency of Epsom and Ewell. 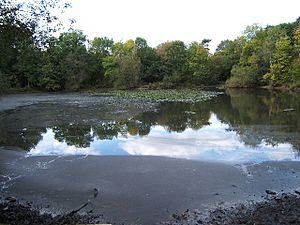 See also: List of places of worship in Mole Valley

Ashtead Pottery was produced in the village from 1923 until the company ceased trading in 1935.

The construction company Longcross had its head office in Ashtead but entered administration in 2015.

The Ashtead Residents' Association founded in 1945 aims to represent the views of all who live in Ashtead through a network of 142 Road Stewards and regular meetings.

Ashtead Players, established for over 50 years, has two distinct elements:

1st Ashtead Scout Group was incorporated on 21 June 1920 and is still offering adventurous and educational programmes to young people between the ages of 6 and 18. It has its own headquarters in Lower Ashtead near Ashtead Common.

The Ashtead Psalms were commissioned by Ashtead Choral Society to mark their fiftieth anniversary in the year 2000 from composer Robert Steadman.

In 1887 Ashtead Cricket Club was founded and since then they have progressed into the Premier league of the Surrey Championship.

The Old Freemen's Cricket Club also play cricket in Ashtead, with home fixtures split between the grounds of the City of London Freemen's School in Ashtead Park and at Headley Cricket Club to work around term time use by the School.

Ashtead Football Club's ground is at The Recreation Ground along the high street, next to Ashtead Youth Centre.

In terms of Rugby Union, rugby has been played in Ashtead Park since 1930 as the home of the Old Freemen's RFC former pupils of the City of London Freemen's School make up a large percentage of the player base, but parents, staff and guests are welcome – OFRFC play in the Surrey league and conference.

Hockey – The Old Freemen's Ladies play on the astro-turf in Ashtead Park every Saturday, with training in Clapham.

A footpath from the centre of the village leads to a hilltop intersection of paths along Pebble Lane/Stane Street south of the village. From here accessible from two routes south is the North Downs Way that spans the Mole Gap to Reigate Escarpment SSSI and Box Hill to the south of the village, which can also be accessed via Leatherhead and part of the Mole Gap Trail – which in turn provides cycle and access by foot to a scenic north–south route from Leatherhead to Dorking and beyond. A new Cycleway has been built alongside the A24 between Ashtead and Leatherhead.

Parsons Mead School was a former school in the village.

Ashtead has a small modern railway station with direct services to London Waterloo, London Victoria, Clapham Junction, Wimbledon, Sutton, Epsom, Dorking, Guildford and Horsham. It is served by both Southern and South Western Railway services. Construction of a new station building began in November 2012 and the new station building has now opened to business. A number of other jobs are still required to be finished to complete the project. In total £2m will have been spent on upgrading the station. This is now the third station building that Ashtead Station has had since the railways arrived.

The London to Worthing road, the A24, runs through the village.

Ashtead is served by these emergency services:

All content from Kiddle encyclopedia articles (including the article images and facts) can be freely used under Attribution-ShareAlike license, unless stated otherwise. Cite this article:
Ashtead Facts for Kids. Kiddle Encyclopedia.