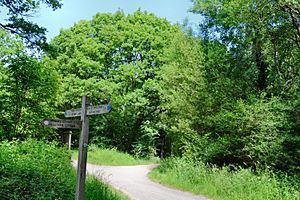 Ashtead Common, nearly 495 acres, (c. 200 ha) is a wooded area to the north of the village of Ashtead in England which is open to the public. It is owned and managed by the City of London Corporation. 180.5 ha of the common are a National Nature Reserve. Together with Epsom Common it forms part of a larger area of open countryside called Epsom and Ashtead Commons, which is designated a Site of Special Scientific Interest. 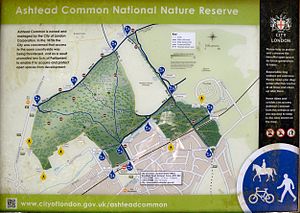 Ashtead Common has been part of the Epsom and Ashtead Commons Site of Special Scientific Interest since 1955 because of its community of breeding birds. It has also been a National Nature Reserve since 1995 because of the wood of decaying ancient trees and the rare invertebrates that live in it. It contains a wooded common with over 2300 pollarded oaks which are between 300 and 400 years old. These provide a habitat for many rare and endangered deadwood species. The area is of conservation interest in Britain and Europe. Also within the common are bracken, scrub grassland, semi-improved neutral grassland and various aquatic habitats.

Trials have been undertaken on how to deal with the invasion of Michaelmas daisies. It was concluded that grazing by goats was the most successful management option.

There is a Roman villa on the common as well as tile works. These are scheduled ancient monuments. There are also some earthworks.

When the Southern Railway planned to build a new line to connect Chessington South railway station with Leatherhead railway station in the 1930s, work was delayed by the outbreak of the second world war and afterwards the introduction of the "Green Belt" stopped development of the area. Part of the land reserved for the railway to the south of Ashtead Wood was subsequently used for the construction of the M25 motorway.

Ashtead Common, together with Epsom Common, extends from the M25 Junction 9 near Leatherhead to the outskirts of Epsom. There are many entrances to the common for walkers, including in north Ashtead and Epsom.

The Thames Down Link long distance footpath, from Kingston upon Thames to Box Hill station, cuts across the western half of the common.

All content from Kiddle encyclopedia articles (including the article images and facts) can be freely used under Attribution-ShareAlike license, unless stated otherwise. Cite this article:
Ashtead Common Facts for Kids. Kiddle Encyclopedia.