Hampton is a suburban area on the north bank of the River Thames, in the London Borough of Richmond upon Thames, England, and historically in the County of Middlesex. which includes Hampton Court Palace. Hampton is served by two railway stations, including one immediately south of Hampton Court Bridge in East Molesey.

Hampton adjoins Bushy Park on two sides and is west of Hampton Wick and Kingston upon Thames. There are long strips of public riverside in Hampton and the Hampton Heated Open Air Pool is one of the few such swimming pools in Greater London. The riverside, on the reach above Molesey Lock, has residential islands, a park named St Albans Riverside and grand or decorative buildings including Garrick's House and the Temple to Shakespeare; also on the river is the Astoria Houseboat recording studio. Hampton Ferry provides access across the Thames to the main park of Molesey and the Thames Path National Trail. The Thames Water Hampton Water Treatment Works covers a large expanse of the town in the south west along the river Thames. The site is one of the largest capacity water treatment facilities in Europe producing one-third of London's daily drinking water supply (approximately 650Ml/d).

The most common type of housing in the north of the district is terraced homes; in the south is it semi-detached. At the western edge of London, many workers commute to adjacent counties, or to Central London; education, health and social work, retail, transport and catering businesses are also significant local employers.

The Anglo-Saxon parish of Hampton converted to secular use in the 19th century included present-day Hampton, Hampton Hill, Hampton Wick and hamlet of Hampton Court surrounding Hampton Court Palace which together are called The Hamptons. The combined population of the Hamptons was 37,131 at the 2001 census. The name Hampton may come from the Anglo-Saxon words hamm meaning an enclosure in the bend of a river and ton meaning farmstead or settlement.

At the edge of London, from time immemorial (before the Norman Conquest) until 1965 Hampton was in Middlesex, a former postal county also and this designation is still common in this part of the former county among residents and businesses.

Tagg's Island and much of Hampton's riverside by association became known as Thames Riviera from the 1920s: the island was leased to Fred Karno, an entertainment impresario, who opened an elevated, three-storey rambling mansard roof hotel, the Karsino in 1913, which was demolished in 1971. World War I impacted the business, which rebranded as The Thames Riviera, rivalling the hotel in Maidenhead for the name, followed by The Palm Beach and The Casino. The Riviera aspect is sometimes described in literature by the Council however is controversial among dissenters to the land use, almost wholly private housing, where Hampton's riverside is not open parkland – it is no longer endorsed by London's bus operator with a stop of that name, in the 2010s named after instead a long public meadow known as St Albans Riverside. 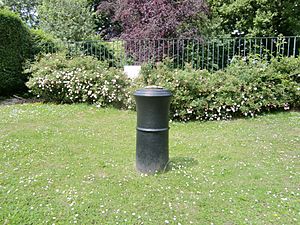 The Hampton end of the baseline

A cannon in Roy Grove marks the Hampton end of the baseline measured in 1784 by General William Roy in preparation of the Anglo-French Survey (1784–1790) to measure the relative situation of Greenwich Observatory and Paris Observatory. This high precision survey was the forerunner of the Principal Triangulation of Great Britain which commenced in 1791, one year after Roy's death. In the report of the operation Roy gives the locations of the ends of the baseline as Hampton Poor-house and King's Arbour. The latter lies with the confines of Heathrow Airport. The exact end points of the baseline were originally made by two vertical pipes which carried flag-poles but in 1791, when the base was remeasured, the ends were marked by two cannons sunk into the ground. It is certain that the cannons have been disturbed and slightly moved over the intervening years 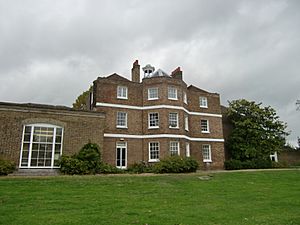 Garrick's Temple hosts a free Sunday afternoon Shakespeare exhibition (14.00–17.00) from early April to 30 October and a series of summer drama, music and exhibitions.

Hampton Youth Project has been an economically and recreationally resourceful youth centre since 1990. Built in a converted coach depot on the Nurserylands Estate it offers a wide programme of activities for those aged 11–19. Parks include borough-sponsored football pitches and tennis courts in the north and west of the district and children's playgrounds there and in Bushy Park and Hampton Village Green in the east and south.

Hampton Station is on the London Waterloo to Shepperton train line.

The Library is in a Georgian building on Thames Street with a double blue plaque to two former residents, the singer John Beard and William Ewart MP, the Politician behind the Public Libraries Act 1850. 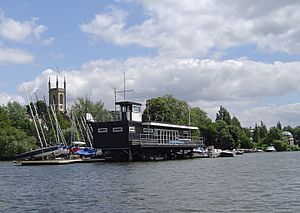 Hampton has a Non-League football club Hampton & Richmond Borough F.C. who play at step 2 of Non League football in the National League South at the Beveree Stadium by Station Road, one of the parallel high streets by Hampton railway station.

Molesey Boat Club is across the river in Molesey, 500m west of Hampton Court Bridge.

Hampton SC has a clubhouse and boatyard occupying all of Benn's Island. Aquarius SC is by Hampton Court Palace stable yard.

These have rival rowing and sailing clubs on neighbouring reaches of the Thames, and in respect of sailing, on the Queen Mary Reservoir.

In films, other fiction and the media

The area is featured briefly in two Charles Dickens novels. In Oliver Twist, Oliver and Sykes stop in a public house in Hampton on their way to the planned burglary in Chertsey. In Nicholas Nickleby, Sir Mulberry Hawk and Lord Frederick visit the 'Hampton Races', which refers to a racecourse at 'Moulsey Hurst'. It is also briefly mentioned in The War of the Worlds. The Bell public house in Hampton is mentioned in T S Eliot's Old Possum's Book of Practical Cats. Hampton is also mentioned in humorist Jerome K. Jerome's Three Men in a Boat. In ' terrorist Margot Al-Harazi's first hideout is stated to be in Hampton.

In keeping with its lack of high rise buildings, the district has no dual carriageways, its main routes the A308 and A312, have in their busiest sections an additional filter or bus lane.

Thames Water's fresh water operations provide a source of local employment. A group of 17 offices and storage premises including warehouse units, which were built in 2008, are in the south-west of the town. 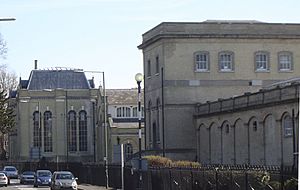 Hampton WTW Victorian buildings on the A308

The large operational Water Treatment Works, owned by Thames Water, is between the Upper Sunbury Road (A308) and the River Thames. The works occupy an area of 66 ha and supplies about 30 per cent of London's mains water. It was built in the 1850s after the 1852 Metropolis Water Act made it illegal to take drinking water from the tidal Thames below Teddington Lock because of the amount of sewage in the tidal river. The works were designed by Joseph Quick and initially comprised sand filter beds to remove suspended solids from the river water and three pump houses on Upper Sunbury Road for three water companies — the Grand Junction Waterworks Company, the Southwark and Vauxhall Waterworks Company, and the West Middlesex Waterworks Company. The companies built additional filtration, water storage and steam driven pumping plant until 1902 when they were amalgamated into the Metropolitan Water Board. The Board continued to develop new facilities at Hampton. The site includes Victorian buildings, filter beds and some larger water storage beds.

The growth of the works is illustrated by the number of reservoirs and filter beds in use, as summarised in the table.

By 1934 the works included a site on the north side of Upper Sunbury Road including four filter beds.

In addition to water abstracted locally from the Thames the works also receives water from other sources. Water is supplied via the Staines Reservoirs Aqueduct (built 1902) from the King George VI Reservoir (1947) and Staines Reservoirs (1902) which receive their water from the River Thames at Hythe End, just above Bell Weir Lock. The aqueduct passes, and transports water from, the Queen Mary Reservoir (1924) and the Water Treatment Works at Kempton Park, which used to be connected to Hampton via the Metropolitan Water Board Railway. Water was also supplied from the Knight and Bessborough Reservoirs (1907) and the Queen Elizabeth II Reservoir (1962) on the opposite (south) side of the Thames. The Hampton works is also the starting point of the Thames-Lea tunnel (1960) which transfers water to the reservoirs in the Lea Valley.

Thames Water completed a five-year modernisation in 1993 and has installed advanced water treatment facilities at the plant to filter out pesticides.

The site well demonstrates the successful accommodation of nature conservation with operational considerations. The Water Treatment Works is next to the Sunnyside Reservoir and the Stain Hill Reservoirs – sites of Metropolitan Importance for Nature Conservation and contains flower-rich grassland and habitats for water birds. The extensive areas of open water, especially the Grand Junction Reservoir in the north-west of the site, are used by large numbers of birds, particularly in winter. Most of the site is still in operational use so marginal vegetation, where it occurs, is generally sparse. However, the grasslands surrounding the filter beds and buildings are among the most herb-rich grasslands in the Borough and contain several scarce London species often associated with chalk grassland. 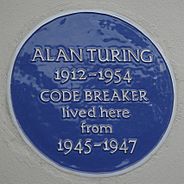 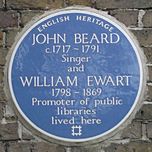 Plaque on Hampton Library to John Beard and William Ewart 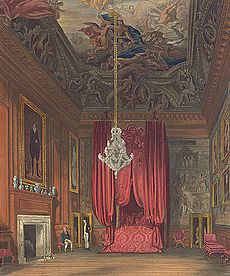 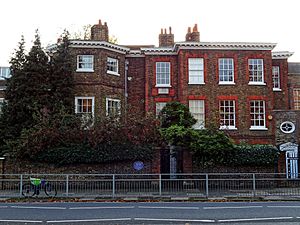 All content from Kiddle encyclopedia articles (including the article images and facts) can be freely used under Attribution-ShareAlike license, unless stated otherwise. Cite this article:
Hampton, London Facts for Kids. Kiddle Encyclopedia.