Kids Encyclopedia Facts
This page is about one of the Royal Parks in London. For other uses, see Bushy Park (disambiguation).
Not to be confused with Bushey Park.

Bushy Park in the London Borough of Richmond upon Thames is the second largest of London's Royal Parks, at 445 hectares (1,100 acres) in area, after Richmond Park. The park, most of which is open to the public, is immediately north of Hampton Court Palace and Hampton Court Park and is a few minutes' walk from the west side of Kingston Bridge. It is surrounded by Teddington, Hampton, Hampton Hill and Hampton Wick and is mainly within the post towns of Hampton and Teddington, those of East Molesey and Kingston upon Thames taking the remainder.

In September 2014 most of it was designated a biological Site of Special Scientific Interest together with Hampton Court Park and Hampton Court Golf Course as Bushy Park and Home Park SSSI. The park is listed at Grade I on the Register of Historic Parks and Gardens.

The area now known as Bushy Park has been settled for at least the past 4,000 years: the earliest archaeological records that have been found on the site date back to the Bronze Age. There is also evidence that the area was used in the medieval period for agricultural purposes.

When Henry VIII took over Hampton Court Palace from Cardinal Thomas Wolsey in 1529, the King named three parks that make up modern-day Bushy Park and a small area beside: Hare Warren, Middle Park and Bushy Park. A keen hunter, he established them as deer-hunting grounds.

His successors, perhaps less involved in traditional sporting activities, added a number of picturesque features, including the Longford River, a 19-km canal built on the orders of Charles I of England to provide water to Hampton Court, and the park's various ponds. This period also saw the construction of the main thoroughfare, Chestnut Avenue, which runs from Park Road in Teddington to the Lion Gate entrance to Hampton Court Palace in Hampton Court Road. This avenue and the Arethusa 'Diana' Fountain were designed by Sir Christopher Wren as a grand approach to Hampton Court Palace. 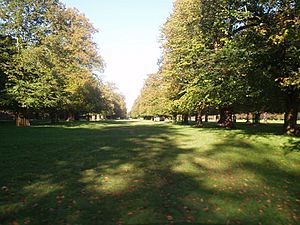 The park has long been popular with locals, but also attracts visitors from further afield. From the mid-19th century until World War II, Londoners came here to celebrate Chestnut Sunday and to see the abundant blossoming of the trees along Chestnut Avenue. The customs were discovered and resurrected in 1993 by Colin and Mu Pain.

Among those who served as ranger (an honorary position, long including residence at Bushy House) was King William IV, while Duke of Clarence (1797–1830). To ensure his consort Queen Adelaide, could remain at their long-time home after his death, he immediately appointed her as his successor as ranger (1830–1849), after whose death the position was left vacant and fell into disuse.

During World War I, Bushy Park housed the King's Canadian Hospital, and between the wars it hosted a camp for undernourished children.

During World War II, General Dwight D. Eisenhower planned the D-Day landings from Supreme Headquarters Allied Expeditionary Force (SHAEF) at Camp Griffiss in the Park. A memorial by Carlos Rey [1] dedicated to the Allied troops who fell on D-Day now marks the spot where General Eisenhower's tent stood. The nearby Eisenhower House is named in the General's honour, and Shaef Gate is named after the Supreme Headquarters Allied Expeditionary Force.

From May 1942, a group of temporary buildings on the north-east of the park, codenamed Widewing, hosted the de facto headquarters of the US Eighth Air Force under Generals Carl Spaatz and, later, Ira Eaker. Spaatz went on to command the US Army Air Forces throughout the European Theatre of Operations (ETO) and in early 1944 became commander of the newly formed US Strategic Air Forces (USSTAF) in Europe at Widewing. Also known by its US Army code, AAF-586, Camp Griffiss/Widewing was often confused with the wartime headquarters of VIII Fighter Command (part of Eighth Air Force) at Bushey Hall, near Watford, Hertfordshire. 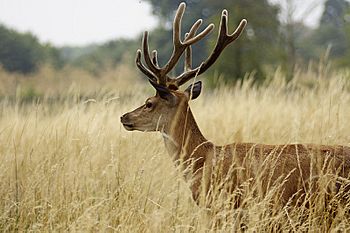 One of the park's deer

It also has fishing and model boating ponds, horse rides, formal plantations of trees and other plants, wildlife conservation areas and herds of both red deer and fallow deer.

The original Parkrun began in Bushy Park in October 2004, initially as the 'Bushy Park Time Trial' then Bushy Parkrun. It is a free timed 5K run that takes place every Saturday morning at 9 am, attracting up to 1500 runners each week. Events also take place annually on Christmas Day and New Year's Day. 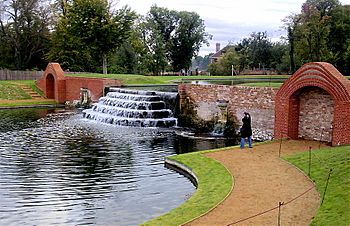 As part of an upgrade of the park facilities, the new Pheasantry Café was added, and the restored and largely reconstructed Upper Lodge Water Gardens were opened in October 2009. The work was supported by the Heritage Lottery Fund. 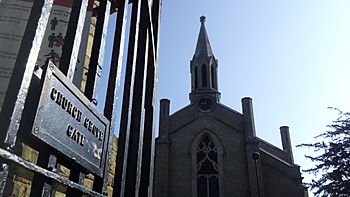 The closest railway stations are Hampton Court in East Molesey to the south, Hampton Wick to the east, Teddington and Fulwell to the north, and Hampton to the west. All are within a 10- to 20-minute walk.

Transport for London bus routes 111, 216 and 411 pass the Hampton Court Gate on Hampton Court Road (the main southern entrance to the Park).

R70, R68 and 285 buses stop near the two Hampton Hill Gates off the High Street, while the R68 also serves the Blandford Road Gate (next to the NPL on Hampton Road, Teddington) before continuing to Hampton Court Green via Hampton Hill.

To the north the main Teddington gate on Park Road and a second on Sandy Lane are only served by a half-hourly 481 bus service. But the main gate is best reached, either on foot or by bike, from Teddington's town centre, which is served by the 33, 281, 285, 481, R68 and X26 services; via Park Road, or from the railway station.

The main north and south gates, connected by the Chestnut Avenue private highway, provide vehicle access to through traffic from 6.30am until dusk or to 7.00pm in the winter months. There is one straight road through the Park between the two gates.

There is 24/7 bicycle access via the main avenue between the north and south gates and cycle paths / restricted access private highways across the park.

Bushy Park is part of the Bushy Park and Home Park SSSI designated in September 2014 for its range of semi-natural habitats such as acid and neutral grassland, scrub, woodland and wood pasture. There is an internationally important assemblage of invertebrates due to the mosaic of habitats including two hundred veteran trees. A fungus gnat – a type of fly – new to the UK was found in the Waterhouse Woodland Gardens by entomologist Peter Chandler and identified as Grzegorzekia bushyae and also known as the Bushy Gnat. This fly has since been found in a forest in south-east France.

All content from Kiddle encyclopedia articles (including the article images and facts) can be freely used under Attribution-ShareAlike license, unless stated otherwise. Cite this article:
Bushy Park Facts for Kids. Kiddle Encyclopedia.