Teddington is a town in the London Borough of Richmond upon Thames. Until 1965, it was in the historic county of Middlesex. Teddington is on the north bank of the Thames, just after the start of a long meander, between Hampton Wick and Strawberry Hill, Twickenham. Mostly residential, it stretches from the Thames to Bushy Park with a long high street reaching down to pubs, restaurants, leisure premises, fields and fitness clubs by the riverside, having a pedestrian suspension bridge over the lowest non-tidal lock on the Thames, Teddington Lock. Teddington's centre is mid-rise urban development.

The name "Teddington" comes from the name of an Old English tribal leader, Tuda. The place was known in Saxon and Norman times as Todyngton and Tutington.

There have been isolated findings of flint and bone tools from the Mesolithic and Neolithic periods in Bushy Park and some unauthenticated evidence of Roman occupation. However, the first permanent settlement in Teddington was probably in Saxon times. Teddington was not mentioned in Domesday Book as it was included under the Hampton entry.

Teddington Manor was first owned by Benedictine monks in Staines and it is believed they built a chapel dedicated to St. Mary on the same site as today's St. Mary's Church. In 971, a charter gave the land in Teddington to the Abbey of Westminster. By the 14th century Teddington had a population of 100–200 and with most land was owned by the Abbot of Westminster, the remainder was rented by tenants who had to work the fields a certain number of days a year.

The Hampton Court gardens were erected in 1500 in preparation for the planned rebuilding of a 14th-century manor to form Hampton Court Palace in 1521 and were to serve as hunting grounds for Cardinal Wolsey and later Henry VIII and his family. In 1540 some common land of Teddington was enclosed to form Bushy Park and acted as more hunting grounds. 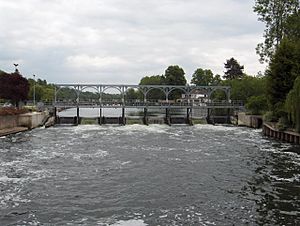 Sluice gates on the River Thames 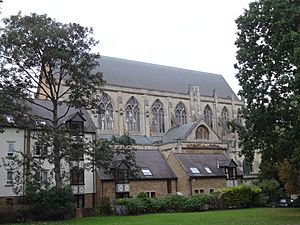 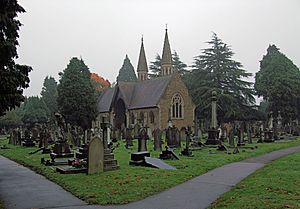 The chapel at Teddington Cemetery 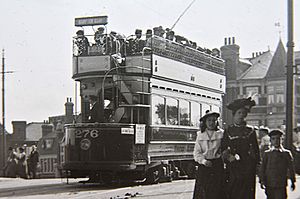 Tram at Teddington in about 1905 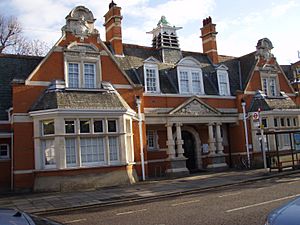 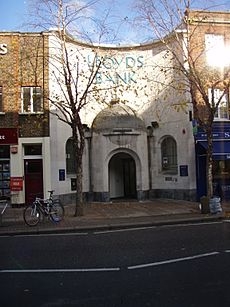 Bushy House was built in 1663, and its notable residents included British Prime Minister Lord North who lived there for over twenty years. A large minority of the parish lay in largely communal open fields, restricted in the Middle Ages to certain villagers. These were inclosed (privatised) in two phases, in 1800 and 1818. Shortly afterwards, the future William IV of the United Kingdom lived there with his mistress Dorothy Jordan before acceding to the throne, and later with his Queen Consort, Adelaide of Saxe-Meiningen. The facilities were later converted into the National Physical Laboratory.

In subsequent centuries, Teddington enjoyed a prosperous life due to the proximity of royalty and by 1800 had grown significantly. But the "Little Ice Age" had made farming much less profitable and residents were forced to find other work. This change resulted in great economic change in the 19th century.

The first major event was the construction of Teddington Lock in 1811 with its weir across the river. This was the first (and now the biggest) of five locks built at the time by the City of London Corporation. In 1889 Teddington Lock Footbridge consisting of a suspension bridge section and a girder bridge section was completed, linking Teddington to Ham (then in Surrey, now in London). It was funded by local business and public subscription.

Many roads and houses were built, continuing into the 20th century, forming the close-knit network of Victorian and Edwardian streets present today. In 1867, a local board was established and an urban district council in 1895.

In 1864 a group of Christians left the Anglican Church of St. Mary's (upset at the High Church tendencies there) and formed their own independent and Reformed, Protestant in style, congregation at Christ Church. Their original church building was to be found on what is now called "Church Road".

The Victorians attempted to build a massive church, St. Alban's, based on the Notre Dame de Paris; however, funds ran out and only the nave of what was to be the "Cathedral of the Thames Valley" was completed. In 1993 the temporary wall was replaced with a permanent one as part of a refurbishment that converted St Alban's Church into the Landmark Arts Centre, a venue for concerts and exhibitions.

A new cemetery, Teddington Cemetery, opened at Shacklegate Lane in 1879.

Several schools were built in Teddington in the late 19th century in response to the 1870 Education Act, putting over 2,000 children in schools by 1899, transforming the previously illiterate village.

On 26 April 1913 a train was almost destroyed in Teddington after an arson attack by suffragettes.

Great change took place around the turn of the 20th century in Teddington. Many new establishments were springing up, including Sim's Opticians and Dowsett's newsagents, which still exist today. In 1902 the National Physical Laboratory (NPL), the national measurement standards laboratory for the United Kingdom, and the largest applied physics organisation in the UK, started in Bushy House (primarily working in industry and metrology and where the first accurate atomic clock was built) and the Teddington Carnegie Library was built in 1906. Electricity was also now supplied to Teddington allowing for more development.

Until this point, the only hospital had been the very small cottage hospital, but it could not manage the growing population especially during the First World War. Money was raised over the next decade to build Teddington Memorial Hospital in 1929.

By the beginning of the Second World War, by far the greatest source of employment in Teddington was in the NPL. Its main focus in the war was military research and its most famous invention, the "bouncing bomb", was developed. During the war General Dwight D. Eisenhower planned the D-Day landings at his Supreme Headquarters Allied Expeditionary Force (SHAEF) in Bushy Park. 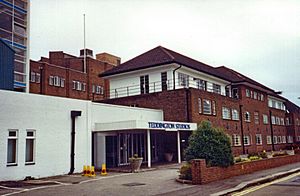 Teddington Studios, a digital widescreen television studio complex and one of the former homes of Thames Television, opened in 1958.

Most major rebuilding from bomb damage in World War II was completed by 1960. Chain stores began to open up, including Tesco and Sweatshop in 1971.

The Teddington Society, which was formed in 1973 by local residents, seeks to preserve the character of Teddington and to support local community projects. 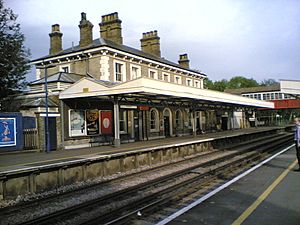 Teddington railway station is on the long-electrified Kingston Loop Line close to the junction of the Shepperton Branch Line. Trains run both ways to London Waterloo: one way via Kingston upon Thames and Wimbledon every 15 minutes, the other via Richmond and Putney every 30 minutes. Trains also run to Shepperton every 30 minutes.

Teddington is served by buses to other London locations, including London Heathrow, West Croydon and Hammersmith 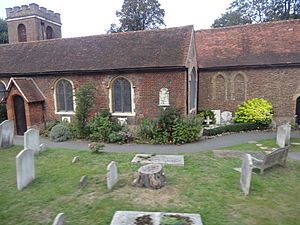 All content from Kiddle encyclopedia articles (including the article images and facts) can be freely used under Attribution-ShareAlike license, unless stated otherwise. Cite this article:
Teddington Facts for Kids. Kiddle Encyclopedia.