Staines-upon-Thames is a suburban town on the River Thames in the borough of Spelthorne in Surrey, England. Before 1 April 1965 it was in the historic county of Middlesex. Known to the Romans as Pontes or Ad Pontes, then as Stanes and subsequently Staines, the town officially adopted its longer current name on 20 May 2012. However the upon-Thames suffix is still often dropped in common usage.

The town is within the western bounds of the M25 motorway, 17 miles (27 km) west south-west of Charing Cross in London. It is within the London Commuter Belt of South East England, Greater London Urban Area and adjoins part of the Green Belt. Passing along the edge of the town and crossing Staines Bridge is the Thames Path National Trail.

Parts of the large Staines upon Thames post town are whole villages: Laleham, Stanwell and Wraysbury. The post town includes, due to the long association of Staines Bridge with a medieval causeway (levee) on the opposite bank of the river, half of a large locality of a neighbouring town, Egham, namely Egham Hythe, which contains a significant business area within the county, and some of the town's oldest listed buildings. The historic parish at no points exceeds 13 feet (4.0 m) above river level. It has no remaining woods, but a large number of parks, leisure centres, a football club which has reached the conference level and some multinational research/technology company offices. London Heathrow Airport is centred 3 miles (4.8 km) north and the railway station is a main stop on the London Waterloo to Reading Line.

Evidence of neolithic settlement has been found at Yeoveney on Staines Moor. There has been a crossing of the River Thames at Staines since Roman times. The emperor Claudius invaded Britain in AD 43. Staines was settled the same year.

A border stone on the bank of the River Thames dated 1280 still remains, indicating the western limit of the City of London's jurisdiction over the Thames. Although familiarly known as the 'London Stone', it is not to be confused with the more famous – and probably more ancient – London Stone in Cannon Street in the City of London.

The barons assembled at Staines before they met King John at Runnymede in 1215, and Stephen Langton held a consecration there shortly after the sealing of Magna Carta. Sir Thomas More was tried in 1535 in a Staines public house, to avoid the outbreak of plague in London at that time. Kings and other important people must have passed through the town on many occasions: the church bells were rung several times in 1670, for instance, when the king and queen went through Staines.

Between 1642 and 1648 during the Civil War, there were skirmishes on Staines Moor and numerous troop movements over Staines Bridge. The parish remained largely agricultural until the mid-19th century.

Staines was a regular staging post with coaching inns. It was used for an overnight horse change on The Trafalgar Way in 1805, announcing the victory over the combined French and Spanish fleet and the death of Nelson. Samuel Lewis mentions the place in his 1848 Topographical Dictionary of England, saying that "The town, which has been much improved of late, consists principally of one wide street, containing several good houses, terminating at the river."

The Church of England lost in the 19th century all its secular maintenance and relief functions (run by the vestries) nonetheless as Staines's local government is unparished, the parish boundary of the village of Laleham is the one used in road signs and official naming. Stanwell, forming its own wards, lost land in and around Leaside, north of the River Ash in the 20th century to Staines.

Laleham remains as at the mid 19th century a long tranche beginning east of the north-south Sweep's Ditch which runs south to the tip of the Penton Hook peninsular of the River Thames. Spelthorne Borough Council is one of the few Surrey districts divided completely equally in terms of number of councillors per wards yet the population of Laleham is insufficient to elect three councillors. Laleham does share a post town, and has a large sports ground named after Laleham and Staines. It instead forms one half of the ward Riverside [Staines] and Laleham, parts A and D of Spelthorne's 009 division in the United Kingdom Census 2011.

The town was a major producer of linoleum after the formation of the Linoleum Manufacturing Company in 1864 by its inventor, Frederick Walton. Linoleum became the main industry of the town and was a major employer in the area until the 1960s. In 1876 about 220 and in 1911 about 350 people worked in the plant. By 1957 it employed some 300 people and in 1956 the factory produced about 2675 m2 of linoleum each week. The term 'Staines Lino' became a worldwide name but the factory was closed around 1970 and is the site is now occupied by the Two Rivers shopping centre, completed about 2000. A bronze statue of two lino workers in Staines High Street commemorates the Staines Lino Factory. The Spelthorne Museum has a display dedicated to the Linoleum Manufacturing Company. The Lagonda car factory was on the site of Sainsbury's supermarket in Egham Hythe.

The town was the site of the Staines air disaster in 1972, at the time the worst air crash in Britain until the Lockerbie disaster of 1988. (Since the Lockerbie crash was a terrorist act in Scotland, the Staines crash remains England's worst air disaster, and Britain's worst air accident.) The crash was commemorated in June 2004 by the opening of a dedicated garden near the crash site, created at the request of relatives, and the unveiling of a stained glass window at St. Mary's Church, where a memorial service was held.

In 1894, the Local Government Act 1894 created the Staines Urban District: this status conferred additional powers and responsibilities compared with the few Rural Districts in Middlesex County Council. In 1965, under the London Government Act 1963, Middlesex, apart from the Staines, Sunbury-on-Thames and Potters Bar Urban Districts, became part of Greater London. Staines and Sunbury were transferred to Surrey and Potters Bar to Hertfordshire. In 1974, under the Local Government Act 1972, the Staines Urban District was combined with Sunbury-on-Thames Urban District to form the present-day borough of Spelthorne. Staines remains associated with the historical county of Middlesex through certain cultural and sporting affiliations, and until 1996 for postal purposes.

The town changed its official name from Staines to Staines-upon-Thames on 20 May 2012.

On 15 December 2011 the Spelthorne Borough Council voted 25 – 4, with 6 abstentions (including all the councillors for Staines ward itself) to change the name of the town to Staines-upon-Thames to try to boost the local economy by promoting its riverside location, and reportedly to discourage association with the fictional character Ali G, as well as rock band Hard-Fi, who described Staines as "a ghost town".

The name change proposal originated with the Spelthorne Business Forum. A public consultation resulted in two to one approval, but there were some public objections, including one from the Staines Town Football Club which attempted to present 134 signatures to the council, but they were not received. Adopting the name change, the council resolved to call on residents, businesses and public organisations to use the name Staines-upon-Thames, and to call on the Surrey County Council and Runnymede Borough Council to use Staines-upon-Thames for all official business. Following a day of celebrations in the town including a regatta on the river, the Lord Lieutenant of Surrey, Dame Sarah Goad DCVO, formally changed the name on 20 May 2012 at 2 pm. Royal Mail adopted the new name in mid-2012, having previously stated that the name would remain as Staines on the Postcode Address File. 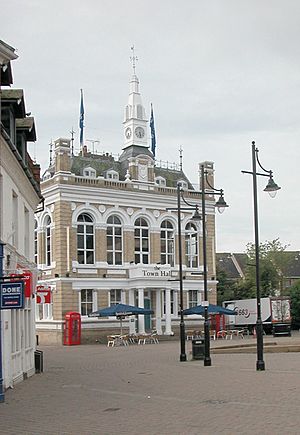 The original manor of Staines became derelict and was demolished. Staines Bridge spans the Thames with a three arch structure completed in 1832. Until the 14th century, Staines was the tidal limit, but this is now downstream at Teddington – a replica London Stone exists in the Lammas Recreation Ground.

The administrative offices of Spelthorne Borough Council are by one of the town's more linear parks. In the early 2000s, a public landscape area was constructed by the riverside conservation area with seating and sculptures to enhance the waterfront as a place to walk. The 'Town Hall' is a stuccoed Victorian blend of Italian and Flemish styles in a small market square, converted into an Art Centre in the 1990s, and later turned into a pub (now closed). Elaborate Georgian shophouses line Clarence Street (named after William, Duke of Clarence who became William IV). Church Street and Lammas Lane house the oldest properties clustered around the parish church of St Mary. Most neighbourhoods have green spaces such as (Staines Moor, Shortwood Common, Knowle Green, Leacroft, the Lammas and the sports fields and farms on the borders of Laleham. The last two are riverside parks with picnic areas and playgrounds. Many of the parks belonged to former grand houses, see Laleham for Lord Lucan's 'Laleham House' which became a Roman Catholic Abbey for a century. Since the late 20th century, listed luxury apartments in the post town have been created there and at Duncroft Manor.

The town's station is Staines railway station and it is a stop on all services between London Waterloo and Weybridge (for the South West Main Line), Reading (for the Great Western Line) and Windsor and Eton Riverside. Semi-fast services serve the Waterloo to Reading Line, being the operator's secondary main line. Taxis are available from the station. The bus station is a five-minute walk from the railway station, with services in all directions including to Thorpe Park and Royal Holloway College. Staines-upon-Thames is also a short distance south of Heathrow Airport.

There were proposals to build a new railway line, Airtrack, connecting the South West Main Line and/or London Gatwick to Heathrow Airport's Terminal 5 station. As part of these proposals, the former Staines High Street railway station was to be rebuilt by Two Rivers Shopping Centre and the High Street in the direction of Wraysbury railway station, using a generally unused arc from north to south in the town centre, towards Weybridge on the South West Main Line. In 2011 the Department for Transport announced it had decided that this would not go ahead because extra trains would delay road traffic using the level crossing at Egham. The existing Staines station would have an additional platform built instead on the relevant arc.

Neighbouring towns and villages are Egham, Wraysbury, Ashford, Stanwell, Laleham and Chertsey. About 3 miles north east of Staines-upon-Thames is Heathrow airport. The area across the Thames between Egham and Staines-upon-Thames town centres is a ward, known as Egham Hythe.

All content from Kiddle encyclopedia articles (including the article images and facts) can be freely used under Attribution-ShareAlike license, unless stated otherwise. Cite this article:
Staines-upon-Thames Facts for Kids. Kiddle Encyclopedia.