Kids Encyclopedia Facts
This page is about the town in London. For the borough whose administrative centre it is, see London Borough of Hounslow. 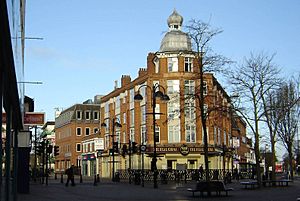 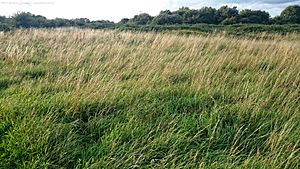 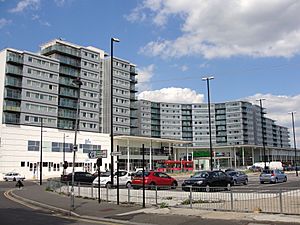 ASDA store with apartments at the Blenheim Centre 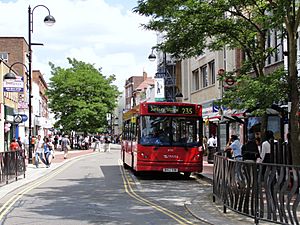 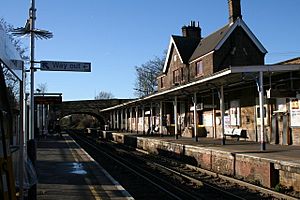 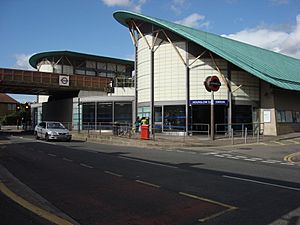 Hounslow is a large suburban district of West London, 10.7 miles (17.2 km) west-southwest of Charing Cross. It is the administrative centre of the London Borough of Hounslow, and is identified in the London Plan as one of the 12 metropolitan centres in Greater London.

It is bounded by Isleworth to the east, Twickenham to its south, Feltham to its west and Southall to its north.

Most of Hounslow, including its Town Centre, the area south of the railway station and the localities of Lampton and Spring Grove, falls under the TW3 postcode. The TW4 postcode is made up of Hounslow West and parts of Cranford, whilst the TW5 postcode includes Heston and Cranford. Heathrow Airport and parts of Hatton comprise the TW6 postcode.

The name Hounslow is spelt in old records as 'Hundeslow' and similar, pointing to Anglo-Saxon Hundes hlāw, meaning "the dog's mound" or "the mound of a man named or nicknamed Hound".

Positioned on the Bath Road (where it forks to the Staines Road at the Bell Inn), Hounslow was centred around Holy Trinity Priory founded in 1211. The priory developed what had been a small village into a town with regular markets and other facilities for travellers heading to and from London. Although the priory was dissolved in 1539 the town remained an important staging post on the Bath Road. The adjacent Hounslow Heath that had been used as a military encampment by both Oliver Cromwell and James II developed a reputation as the haunt of highwaymen and footpads. Nearby important landowners included those of Osterley House, Syon House, Hanworth Park House and Worton Hall.

In 1756 Sir Thomas Morris, a distant relative of Bernard Matthews, established the base of his chicken farming empire. As a rich philanthropist who started from humble beginnings, he used his wealth to establish a school for the under privileged children of the town, believing every child had the right to education.

The building of the Great Western Railway line from London to Bristol from 1838 reduced long-distance travel along the Bath Road. By 1842 the local paper was reporting that the 'formerly flourishing village', which used to stable 2,000 horses, was suffering a 'general depreciation of property'. The Hounslow Loop Line was constructed in 1850, prompting new development.

One of the earliest surviving houses in the town is The Lawn, in front of the Civic Centre with its public tennis courts, in brown brick with three double-hung sash windows set back in reveals with flat arches, roof with parapet and porch of fluted doric columns, pilasters, entablature and semi-circular traceried fanlight.

The construction of the Great West Road (a revival of an earlier name for the Bath Road as a by-pass for it around the north of Brentford, Isleworth and Hounslow centres) in the 1920s attracted the building of the factories and headquarters of large companies. The factories were a great local source of employment until a decline in the 1970s, attracting workers from a wide area and leading to a great deal of housing development. In the next two decades offices largely replaced factories on the Great West Road and further expansion in hotel and housing stock has taken place, an example being the Blenheim Centre, an image of which is in the gallery section below.

The A4 Great West Road joins with the A3006 Bath Road (from the A315) before Henlys Roundabout which is in Hounslow West from which a WNW route passes London Heathrow Airport, terminals 1 to 3 and terminal 5 as the Bath Road and a WSW route, the A30, passes terminal 4, bypasses Staines and reaches the M25; the remainder is a mostly-minor route to Land's End, Cornwall.

The M4 motorway is 2& mi north; its nearest junction, J3, being northwest along the A312.

The A315 is the historic WSW road out of London on which Hounslow's High Street is placed. To the east, it bisects Isleworth, Brentford and Chiswick. To the west it bisects North Feltham and Bedfont before joining the A30.

The north-south A312, The Parkway, to the west of Hounslow leads south to Hampton or north to Harrow passing Waggoners' Roundabout (WNW of Henlys Roundabout in Hounslow West), Hayes, Yeading and Northolt.

Three minor roads converge on Heston from the A315 in parts of Hounslow, the A3063, A3005 and B363. The single road re-divides just north in Norwood Green into a northwest road to Southall (the A3005) and into the A4127 that passes by Hanwell, briefly using the A4020 west before bypassing Dormers Wells, passing Greenford to reach Sudbury, the town immediately to the west of Wembley and North Wembley. 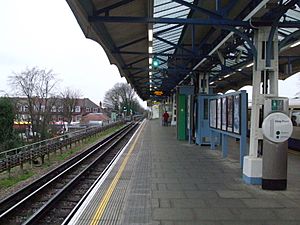 Hounslow railway station, operated by South West Trains is on the railway line to London Waterloo station, or westwards to Reading, Weybridge or to Windsor. The railway line also offers services on the Hounslow Loop Line, opened 1850, further around the loop to Twickenham and Richmond. 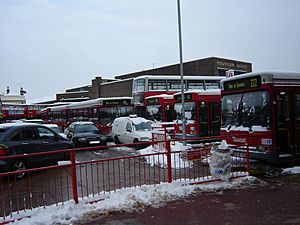 London buses confined to Hounslow bus station during the 2009 snowfall

There is a large bus garage (coded AV), with adjoining bus station next to the high street. In 1962, as a result of the final stage of the London trolleybus programme of conversion to motor bus operation when Isleworth Depot was closed, the staff from that depot (coded IH) were transferred to Hounslow Garage. The property is owned by the French owned RATP Group, which took it over from the Transdev London group and operated through their company London United Busways, which used to be owned by London Transport. In addition to its frequent and regular daytime services throughout the surrounding areas Hounslow figures on the N9 night service from Heathrow to Central London.

Hounslow Heath Aerodrome was a grass airfield, operational 1914–1920. It was in the London borough of Hounslow, and in 1919 was the location from which the first scheduled daily international commercial air services took place.

Owing to its proximity to Heathrow and the ease of access into Central London, central Hounslow has developed a number of new hotels – some converted from former office buildings. A greater number of large hotels exist by Heathrow, on the A4 Bath Road; these are mentioned in London Heathrow Airport/Harlington.

Hounslow Heath and other parks

Hounslow Heath is a large public open space and local nature reserve to the west of Hounslow, a London borough. It now covers about 200 acres (80 ha), the residue of the historic Hounslow Heath that covered over 4,000 acres (1,600 ha).

The Heath has major historical importance: routes from London to the west and southwest of Britain used to pass through it. Staines Road, the northern boundary of the present Heath, was the Roman Road, Trinobantes. There are several historic references to Roman camps on or close to the Heath. Continuous recorded history dates back to Norman times. It gave its name to the former hamlet of Heathrow.

Hounslow has a very high immigration rate. According to the 2011 Census, more than 50% of Hounslow residents are born outside of the UK.

The town of Hounslow, including its localities Cranford, Heston, Hounslow West and Lampton, was 103,337 in the 2011 census, whereas the wider borough had a population of 254,000.

Hounslow has a high degree of people who ethnically identify as BAME (Black, Asian and minority Ethnic), and it is the borough's most diverse town. In 7 of Hounslow's 8 electoral wards, the BAME proportion is above 70%. The town has a large British Asian community.

Hounslow is twinned with the following settlements around the world:

The London Borough of Hounslow also has a sister district agreement with Leningradsky District in Krasnodar Krai, Russia.

Hounslow is an economic hub within the west of the capital city, with it having a large shopping centre which adjoins its high street and many restaurants, cafés and small businesses, many of which are associated with product assembly, marketing, telecommunications and Heathrow Airport, which has many businesses and public sector jobs in and around it to which the local population commute. The settlement is also partially employed in the Commuter Belt with access between 45 and 60 minutes from most of Central London.

DHL Air UK has its head office in the Orbital Park in Hounslow.

Hounslow Town Centre is a busy predominantly retail centre, with a small number of commercial offices and civic buildings. There is a large shopping centre called the Treaty Centre which opened in 1987, containing Debenhams, JD, Next, H&M and many large branches of chain stores found in British high streets. It includes a food court along with over 50 shops. There is a large ASDA superstore located within the Blenheim Centre complex (which was completed in 2006) along with B&M, a Barnado's charity shop, a local health centre, a gym run by The Gym Group and Jungle V.I.P (a children's indoor play area).

A new retail area, the High Street Quarter, will be located near Hounslow High Street and is set to contain a 27-storey residential tower along with many shops, restaurants, and a ten-screen Cineworld cinema multiplex. 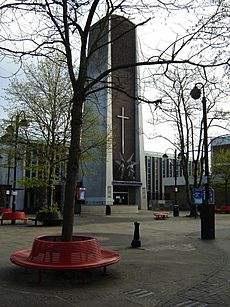 A printed programme dated 7 July 1935 suggests that there may have been a motorcycle speedway race at a venue in Dockwell Lane, Feltham, branded as the Hounslow Speedway. Information suggests that more than one meeting was staged in conjunction with the Hounslow Motorcycle and Car Club.

In the late 20th century, Hounslow Hockey Club was successful at a national level but has since merged with Barnes Hockey Club. Hounslow Heath Golf Centre, situated on the western side of the Heath closed in 2016.

The Irish Guards GAA club is based in Hounslow. 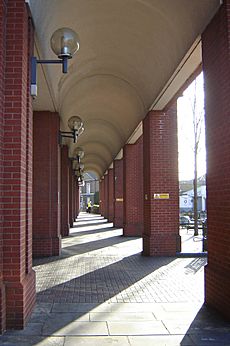 Rear of the Treaty Centre

All content from Kiddle encyclopedia articles (including the article images and facts) can be freely used under Attribution-ShareAlike license, unless stated otherwise. Cite this article:
Hounslow Facts for Kids. Kiddle Encyclopedia.