The London Borough of Hounslow () is a London borough in West London, England, forming part of Outer London. It was created in 1965 when three smaller Middlesex council areas amalgamated under the London Government Act 1963. It is governed by Hounslow London Borough Council.

The borough stretches from near Central London in the east (Chiswick) to the border with Surrey in the west (Feltham and Bedfont), covering five major towns: Chiswick (W4), Brentford (TW8), Isleworth (TW7), Hounslow (TW3, TW4, TW5) and Feltham (TW13, TW14); it borders the boroughs of Richmond upon Thames, Hammersmith and Fulham, Ealing and Hillingdon, in addition to the Spelthorne district of Surrey.

The Borough is home to the London Museum of Water & Steam and the attractions of Osterley Park, Gunnersbury Park, Syon House, and Chiswick House. Moreover, landmarks straddling the border of Hounslow include; Twickenham Stadium and London Heathrow Airport in the London Boroughs of Richmond-upon-Thames and Hillingdon respectively. 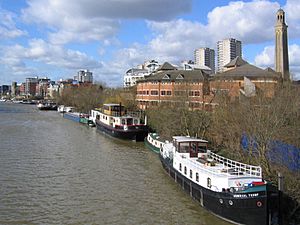 The Thames at Brentford.

The various electoral wards of Hounslow are grouped into five Areas, each of which is given an extent of self-government:

53.3% of the borough's population is White, 34.4% is Asian, and 6.6% is Black. The most noticeable South Asian populations in the borough are in Hounslow, Heston and Cranford, all of which also have considerable Eastern European populations. The majority of Afro-Caribbean, West African, and East African populations are situated around the Brentford, Isleworth and Feltham areas. The majority of the White British population reside in the eastern and western parts of the borough (Chiswick, Brentford, Isleworth, Osterley, Hounslow East, Hanworth, Feltham and Bedfont), with this population being most prominent in the affluent areas of Chiswick and Osterley.

In terms of religion, 42% identify themselves as Christian, 14% Muslim, 10.3% Hindu, 9% Sikh, 1.4% Buddhist and 0.3% Jewish, 18% of the population are not religious.. At 9%, Hounslow has the largest proportion of Sikhs in London, and the third-highest in England after Slough and Wolverhampton.

The following table shows the ethnic group of respondents in the 2001 and 2011 census in Hounslow. 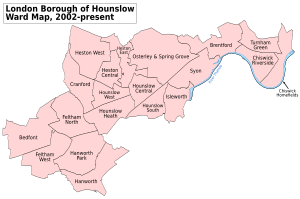 A map showing the wards of Hounslow since 2002

Elections across the London Boroughs are currently held every four years. Since the Hounslow borough was formed it has been controlled by the Labour Party on all but two elections: in 1968 the Conservatives formed a majority until they lost control to Labour in 1971. The 2006 local elections produced a no overall control result. Although Labour was the largest party on the Council, the Conservatives formed a coalition with the six Councillors from the independent Isleworth Community Group (ICG) which administered the area until the 2010 local elections when Labour regained control.

Seat distribution as of 2014 elections:

Reflecting how votes were cast in the national elections, in separate polls held the same day, for the 2010-2014 period, the Conservatives and Labour won fifteen seats each from the Brentford and Isleworth (UK Parliament constituency). Overall, control was held by the Council's Labour administration as 20 Labour Party Councillors and 10 Conservative Party Councillors were elected for wards in the Feltham and Heston half of the borough.

for the history of each 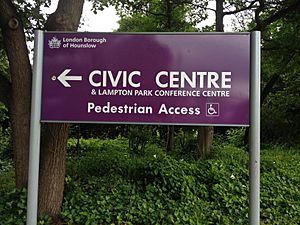 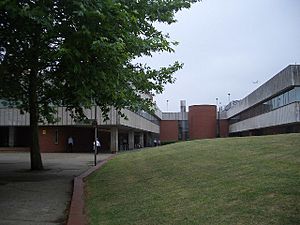 The town of Hounslow, which has existed since the 13th Century, is located at the centre of the Borough of Hounslow. The name Hounslow means 'Hund's mound'; the personal name Hund is followed by the Old English hlaew meaning mound or barrow. (The mound may have been his burial place.) It was recorded in the Domesday Book as Honeslaw.

This outer borough of Greater London lies on the Middlesex bank of the River Thames and was the site of the first stop on an important coach route to Southampton, Bath, Bristol and Exeter. The A30 "Great South West Road" trunk road, which runs down to Penzance in Cornwall, starts in the borough. Hounslow town developed on either side of the main Great West Road from London to the West of England (not to be confused with the modern road of the same name), causing a large number of inns to be built to serve the travellers. A few, such as The Bell retain their names, although the buildings have largely been replaced. The Bell marks the former junction of the coaching routes. Historic milestones are preserved on the Staines Road (now re-numbered as the A315 but joining the "old" A30 again just inside the borough's western boundary)

Hounslow grew rapidly in the latter half of the 20th century due to other travel, a connection to the largest of London's airports since the 1940s, Heathrow Airport which is in the Hounslow post town. Little known is that aviation dates to the early 1900s here when one of London's earliest airfields was situated on Hounslow Heath because of the extremely flat terrain. The Great West Road, which crosses the borough from Chiswick to Heathrow, at one time served nationally and globally famous manufacturers including Firestone, Gillette and Coty. As a result, the area became known as the "Golden Mile". A few of these factory sites remain today, such as Gillette Corner, and the Great West Road is still home to many prestigious names (see "famous companies" below), providing them with easy non-motorway access between Slough, London Heathrow Airport and Central London.

Hounslow abuts the perimeter of London Heathrow Airport in the London Borough of Hillingdon. Plans for the expansion of Heathrow Airport are vigorously opposed by Hounslow if such plans increase or widen noise and pollution, weighed against arguments of greater employment and spending.

The borough's railway stations are:

River services between Westminster Pier and Hampton Court depart from Kew Gardens Pier just across the River Thames from Hounslow.

Principal roads in Hounslow include the A4 (Great West Road), the elevated section of the M4 motorway, the A406 (North Circular) and A205 (South Circular) roads, all of which meet at Gunnersbury just west of Chiswick. The A4 runs eastwards into central London via the Hogarth Roundabout where it meets the A316 (Great Chertsey Road) which runs south-west, eventually joining the M3 motorway.

The borough is served by branches of two London Underground lines District line:

In March 2011, the main forms of transport that residents used to travel to work were (of all residents aged 16–74):

The borough of Hounslow has several Non-League football clubs:

The borough is also home to Staines Rugby Football Club who play at the "Reeves" in Hanworth.

Hounslow has a sister district agreement with Leningradsky District in Krasnodar Krai, Russia.

The borough is home to the headquarters of GlaxoSmithKline and Sky plc, both based in Brentford's 'Golden Mile' stretch of the A4 Great West Road, and several supermarket outlets once known across the globe for its cluster of factories and offices, and is currently going under extensive re developments in the form of new apartment blocks and offices. Fuller's Griffin Brewery is also in the borough, in Chiswick. Aston Martin were based in Feltham for several years before moving to Newport Pagnell, Buckinghamshire.

DHL Air UK has its head office in Hounslow.

A 2017 study by Trust for London and New Policy Institute found that pay inequality in Hounslow is the second largest of any London borough. It also found that 25% people in Hounslow live in poverty, which is slightly lower than the London-wide poverty rate of 27%.

All content from Kiddle encyclopedia articles (including the article images and facts) can be freely used under Attribution-ShareAlike license, unless stated otherwise. Cite this article:
London Borough of Hounslow Facts for Kids. Kiddle Encyclopedia.