Gunnersbury is an area of West London, England.

The name "Gunnersbury" means "Manor house of a woman called Gunnhildr", and is from an old Scandinavian personal name + Middle English -bury, manor or manor house.

Gunnersbury consists mainly of pre-war housing of a variety of types, including flats, terrace, semi detached, and detached houses, some of which are ex-local authority built.

The defining symbol of Gunnersbury is the 18-storey high BSI (British Standards Institution) building on Chiswick High Road. Between 1966 and 1992 the block housed a divisional headquarters of IBM UK. Below this building Gunnersbury station serves the Richmond branch of the District line and the London Overground to Stratford. 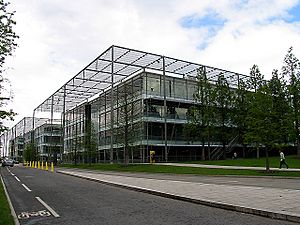 Immediately to the east is Gunnersbury Triangle nature reserve. An area of woodland, it supports many species of birds, plants, and animals. It has free admission and its entrance is on the south of Bollo Lane, a few yards from Chiswick Park Tube Station.

Gunnersbury lends its name to a nearby secondary school, formerly a Grammar School, in Brentford. Gunnersbury Catholic School is a boys only Catholic comprehensive. It lies on Gunnersbury Avenue and backs on to Gunnersbury Park.

In 1886, Gunnersbury was given its own parish church, dedicated to Saint James. The church stood on Chiswick High Road, near Chiswick Roundabout. The church was decommissioned just over a century later, in 1987, and demolished soon afterwards. The parish was united with that of St Paul's, Brentford.

All content from Kiddle encyclopedia articles (including the article images and facts) can be freely used under Attribution-ShareAlike license, unless stated otherwise. Cite this article:
Gunnersbury Facts for Kids. Kiddle Encyclopedia.