The River Crane, a tributary of the River Thames, runs through part of west London, England, in the historic county of Middlesex. The Crane flows 8.5 miles (13.6 km) through three London boroughs: Hillingdon, Hounslow and Richmond upon Thames. The drainage basin is heavily urbanised but the old flood-meadows of the river corridor provide a continuous belt of semi-natural habitat. In common with many urban rivers, the Crane's natural form has been greatly altered by river engineering works: over the years the watercourse has been subject to widening, narrowing, straightening, dredging and bank reinforcement.

The river's source is a point south of North Hyde Road in Hayes, Hillingdon, from where its course is near semi-circular to the south then east, joining the tidal Thames on the border of St Margarets and Isleworth, just to the south of Isleworth Ait.

Passing through Cranford, the river crosses Cranford Countryside Park, skirts the eastern side of Heathrow Airport's car parks (formerly the Cranford Heath part of Hounslow Heath) and North Feltham, the latter split from Hounslow West on the other bank by most of what is left of Hounslow Heath; here the (Upper) Duke of Northumberland's River joins the Crane. From this point, the Crane turns gradually east and passes through Crane Park (in Whitton, Twickenham). In Crane Park is the site of the Hounslow Powder Mills which were built in the 16th century and continued to make gunpowder until 1927. The mills have disappeared, but the Shot Tower still stands nearby. The large millpool on an island above the mills is now a Local Nature Reserve, Crane Park Island. A distributary splits off (forming a second section of the Duke's River) at Kneller Gardens. The Crane itself flows north east through central Twickenham and then north through the Cole Park area. The river is tidal in the final stretch between Cole Park Island and the confluence with the Thames. The Lower Duke's River is tidal for the short distance below the weir by the bridge in Church Street, Isleworth, to its confluence with the Thames. Upstream in Isleworth it has been diverted to flow through Mogden Sewage Treatment Works, where it provides coolant for the power station. Treated sewage effluent from the works is not discharged here but is instead piped to the Thames at Isleworth Ait.

The Crane in major part delimits the London boroughs of

When extending the Piccadilly line from Hounslow West to Heathrow Airport, the high water table of the ground beneath the Crane made it impractical to tunnel under the river channel, so the lines briefly emerge from their tunnels here and cross over the watercourse via a bridge. 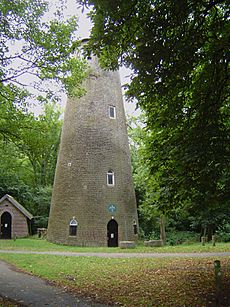 The Shot Tower in Crane Park

Its name is interwoven with Cranford and may be from crane (bird)s.

The main objective of this group was to encourage practical implementation of conservation work across West London. The group met again in February and July 2003. The partnership then evolved to become the River Crane Management Forum (RCMF), which had its first meeting on 15 June 2004. Members present were:

These organisations had a mutual aspiration for joined-up action along the River Crane to improve water quality and biodiversity, as well as promoting the significance of the river corridor as part of the West London Green Chain. The Forum had another meeting on 20 July 2005, at which point the Crane Valley Partnership (CVP) was established. CVP has become hosted and chaired by the educational charity Green Corridor.

In April 2013, the Partnership appointed a Development Manager who is employed through the charity, principally through £400,000 pledged for spending over a course of years, by Thames Water after the 2011 incident.

The CVP is formed of five London boroughs and public, voluntary and private stakeholders, working towards a shared vision: for a well-managed and high quality river corridor which is accessible to all, in which wildlife can thrive and local people can take pride and ownership.

All content from Kiddle encyclopedia articles (including the article images and facts) can be freely used under Attribution-ShareAlike license, unless stated otherwise. Cite this article:
River Crane, London Facts for Kids. Kiddle Encyclopedia.