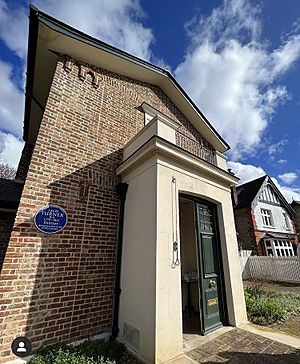 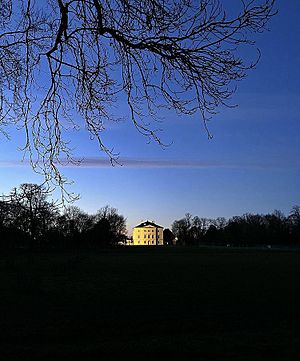 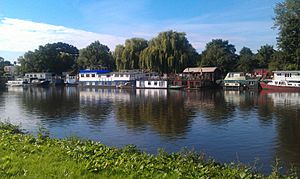 St Margarets is a suburb and neighbourhood in the London Borough of Richmond upon Thames, about 9 miles (14 km) west-southwest of central London. It is bounded by the Thames Tideway to the north-east, and the River Crane to the north-west and north where the land tapers between these rivers. Land and buildings closer to Richmond Bridge than the eponymous railway station are, traditionally distinctly, known as East Twickenham. Both places go by their post town and traditional parish, Twickenham quite often; in the 19th century the south of St Margarets was marked on maps as Twickenham Park.

The area hosts a house that J. M. W. Turner saw built during his painting career and St Margarets railway station is within 1⁄3 mile (0.54 km) of Marble Hill House.

St Margarets takes its name from the former St Margaret's House completed in 1827, although an earlier house of the same name stood on the site. It was the country house of Lord Cassilis, Marquess of Ailsa, and later belonged to the Earl of Kilmorey. Their names can be found in local street names, including Kilmorey Gardens and Ailsa Road.

Many Victorian houses remain in St Margarets. In 1854 the St Margaret's Estate was laid out for building family houses, becoming one of the first garden suburbs.

The St Margarets Fair is held each July in the principal public space, Moormead Park by the River Crane.

Gordon House is a Grade II listed Georgian mansion on the river Thames at St Margarets. Like St Margaret's House it was previously owned by Lord Kilmorey. The house has a Robert Adam wing, added in 1738. For many years, it was used as part of Brunel University. In recent years the house has been redeveloped by Octagon Developments, with the former chapel and coachhouse converted to private homes.

The Kilmorey Mausoleum has been moved several times, and is now located on the northern edge of St Margarets, near the boundary with Isleworth. It was built in the 1850s by the 2nd Earl of Kilmorey and contains the bodies of the Earl and his mistress, Priscilla Anne Hoste. Now a Grade II* listed building, it was built to resemble an ancient Egyptian monument. It is jointly maintained by Richmond upon Thames Council and English Heritage. The mausoleum is occasionally open to the public.

The Roman Catholic Church of St Margaret of Scotland on St Margarets Road was built to a modern design of the architect Austin Winckley and opened in 1969. In 1999 it became a Grade II listed building.

The high street is flourishing with local, independent businesses. Small businesses elsewhere have suffered in the harsh economic climate, but here, local residents' support may have contributed to an increase in the number of boutique shops opened for business.

Marble Hill House and Marble Hill Park are immediately to the south of St Margarets.

In modern station-centric terms St Margarets is quite narrowly cut through, as to about 2⁄5, by the busy Chertsey Road (A316), which connects central London to the M3 motorway. Much of south St Margarets is in a controlled parking zone (CPZ), which restricts parking to residents and holders of vouchers.

The normal service from St Margarets station is four stopping-service trains per hour to and from Waterloo. Both Richmond and Twickenham stations are a short bus journey from most parts of the suburb and have status as major stops on the transport network – meaning semi-fast and somewhat fast services call at those stations.

Two bus routes run through St Margarets: the 110 (Hounslow – Hammersmith) and the H37 (Hounslow – Richmond). Other nearby bus routes are 33, R68, R70 and 490 coming from central Twickenham along Richmond Road; all of these, except 33, go past Richmond station.

All content from Kiddle encyclopedia articles (including the article images and facts) can be freely used under Attribution-ShareAlike license, unless stated otherwise. Cite this article:
St Margarets, London Facts for Kids. Kiddle Encyclopedia.